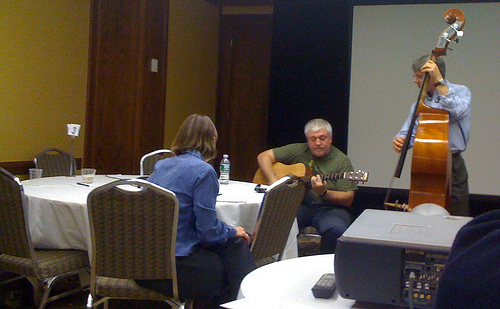 While we “don’t do numbers here at RedMonk, I come across many interesting ones each week. Here are some:

This week, all of RedMonk was at the IBM software group’s Connect event (see my notes on the event as well as James’ note). These events always have a blur of fun numbers, here are some:

“I’m looking forward to a future where our ability to succeed in business is governed by the quality of our products and our customer relationships. That hasn’t always been true in the past but in the future it will be,” he said.

It’s an uphill battle for AMD, however. Intel extended its share of CPU shipments to 81.1 percent in the third quarter, while AMD’s share declined slightly to 18.7 percent, according to figures from IDC.

Ballmer noted that “96 times out of 100, worldwide, people choose a PC with Windows.”

He added that even in the toughest market–the high end of the U.S. consumer market–Windows is chosen 83 times out of 100.

“That doesn’t let us rest on our laurels,” Ballmer said. “Apple has picked up a couple tenths of a percent of market share.”

APAC continues to astound me with its growth. The financial crisis seems to have just glanced by. One lagging indicator of how well an economy is doing is the job market – all the large global banks – Merrill, SCB, Barclays, UBS – have 100s of jobs open in Singapore. We all have known for a while that APAC would be the next market, the difference now is that all the large globals are establishing large physical presence in APAC. They are now installing large datacenters, and are placing executives in APAC. ISVs and our other partners are growing their presence, in particular hiring local talent, replacing the expat personnel that had previously established satellite offices in APAC.

We all the know about the growth rates of China and India, there is a new statistic that came out earlier this week – the World Wealth Report released its annual report which states that the number of millionaires in China now exceeds the number in the UK. The only countries with more millionaires than China today are US, Japan and Germany. The number of high net worth individuals (those with USD1M or more in investable assets) are expected to grow at a rate of 12.3% a year in Singapore, versus 7% in the US. This shift of wealth from “west to east” is likely to continue, with APAC predicted to overtake North America as the largest center of wealth by 2013.

Who says there’s no money in open source?

Our revenue and expenses are consistent with 2007, showing steady growth. Mozilla’s consolidated reported revenues (Mozilla Foundation and all subsidiaries) for 2008 were $78.6 million, up approximately 5% from 2007 reported revenues of $75.1 million. The majority of this revenue is generated from the search functionality in Mozilla Firefox from organizations such as Google, Yahoo, Amazon, eBay, and others.

Cloud-based business processes are the largest portion of the cloud services market, which includes advertising, e-commerce, human resources, and payments processing, and Gartner forecast 19.8 percent growth in the segment to $46.6 billion this year. Advertising-supported services, such as those provided by Google and emulated by Microsoft, Yahoo, and others, account for 60 percent of overall cloud services and will remain the largest component through 2013, Gartner said.

Adobe, maker of the Flash technology that powers many online videos and games, and maker of popular design software Photoshop, announced today that it’s cutting 680 full-time jobs, totaling around 9 percent of its workforce.

The news follows several other unpleasant announcements from Adobe over the past year. The company already announced plans to cut 600 jobs a year ago.

The company reported stronger financial results based on customer growth. Rackspace is currently managing 54,655 servers as of the third quarter. Rackspace has a total of 80,944 customers.

The company has been pushing into the business of so-called “cloud” computing, allowing customers to store data online rather than on their own servers. It says cloud revenue climbed 17 percent from the second quarter to $15.3 million. The segment now accounts for about 10 percent of revenue, up from 5 percent a year ago.