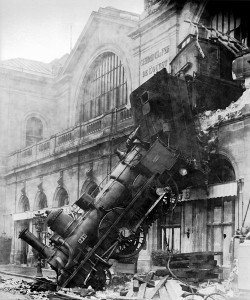 Ahh, what a difference a good night’s sleep makes.  The Greeks are still threatening default on their bonds, the economy is still in the loo, the major stock indices are teetering on a bear market precipice and Marc Benioff is still going to speak at Oracle OpenWorld or at least next door.  But there is some clarifying news.

First, the guys at Oracle can claim that they didn’t cancel Marc, they simply moved his talk to Thursday.  Unfortunately, Marc is getting on a plane this afternoon to go on sales calls back east (The man still visits customers and asks for the order.  Not making any comparisons, just sayn).

The trip was planned for weeks according to my sources at Salesforce so there was no way to reschedule.  I am sure that was communicated when Oracle offered the choice 8 am slot on Thursday morning instead.  It’s sort of like saying, no, your vacation was not really cancelled, it’s just been rerouted to Siberia.

There’s been some good analysis by Larry Dignon suggesting that the audience is being played and I think there might be some truth in it.

Last year, if you recall, there was a minor contretemps in the press between Ellison and Benioff over cloud computing.  Larry had introduced his compute server, Exalogic, and Marc was deriding it as a cloud in a box.  “Beware of the false cloud,” he said.  We all laughed and reported all of it.  Larry got coverage, Marc got coverage and it was all good for business.

I am sure this was not collusion, just two guys who know each other’s moves and how to play a certain game.  This resembles improvisational comedy quite a bit or maybe it is real life imitating improv.  Here’s how it works — two funny people can riff on an idea for a long time without ever having a script by knowing a simple rule or two.

The first is be funny and the second is always say yes.  In other words, regardless of what the other comedian says, accept it as valid and build on it, just never say no, I don’t think so, and the sketch can go on for a long time.

Like many human activities improv resembles an arms race with each iteration ratcheting up the stakes.  Start with an insult, end with a war.  Perhaps.  There are some grains of truth in all this but as with improv, it is hard to determine how much.

For certain, Larry’s talk on Sunday was a train wreck panned by even the mainstream press.  Was there concern that Marc would upstage Larry in his own venue?  I believe Larry speaks this morning also.  Marc will certainly talk about cloud computing and software and deride Oracle’s hardware despite the obvious fact that at the end of every cloud rainbow there is not a pot of gold but a server farm.

On the other hand, Oracle is late to the game with its Fusion products that would give them a whole cloud story.  I sat in a briefing yesterday with nine IT executives and CTOs of companies that were in the Fusion beta program.  We couldn’t report names of companies, but they exist and appear to be happy.  That’s the state of Oracle’s newest cloud software though certainly products like CRM On-Demand have been around almost as long as Salesforce.  Not to worry though, I think Oracle has made excellent progress, as I relate here, in the two years since Larry first derided cloud computing at the Churchill Club.

At any rate, the Larry and Marc show will go on today.  It will be great theater and, like great improv, there will be a grain of truth in everything said by the participants.