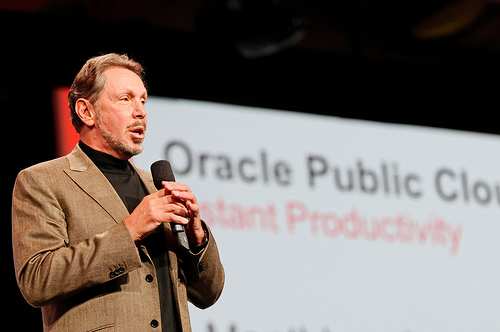 At his second and final keynote address to the 2011 Oracle OpenWorld user meeting, Larry Ellison finally gave the rabid software oriented audience something to savor.

Throughout the week the Oracle CEO and his minions had spent large amounts of time telling us about hardware or some other aspect of the business leaving me and my software analyst and blogger friends champing at the bit.  That changed in Ellison’s second keynote when he announced the Oracle Cloud, the Oracle Social Network for business and the arrival of Fusion applications.  There may have been other introductions but honestly I was scheduled to be on a panel at 5 PM and for all I know Larry is still talking.

Ellison’s keynote did not come without drama.  A long-running argument between Ellison and former Oracle vice president Marc Benioff, CEO of Salesforce.com, nearly blew a fuse when Oracle cancelled Benioff’s keynote forcing him to scramble to find other accommodations to address Oracle Nation.  It was great political theater when Salesforce hired the St. Regis hotel and set up campaign style picketers with signs and slogans — “The cloud must go on” — out on the street.

Much of the drama could have been avoided if only Oracle had introduced its software trove earlier in the week.  The idea of both Benioff and Ellison speaking about opposing views of cloud computing at the same conference and on the same day proved too much even for San Francisco.  Instead, earlier in the week, Ellison laboriously discussed his company’s line of high performance computer gear aimed at the high end of the market, which many of us in the analyst community greeted with a so-what attitude.

The question of why Oracle held its fire for so long is curious and will be the subject of many post mortems.  When I try to puzzle through this turn of events I have to conclude that if they had announced the cloud and social network earlier in the week, they would have been forced to answer questions and provide demonstrations.  As it is, we all go home armed with knowledge of these products only through a demo that Larry did on stage but none of the reassurance that they are real.  It would not be the first time that Oracle announced something early.

I am therefore forced to conclude that at least the cloud and social network that were announced are not really ready for prime time.  I am sure the products exist in some form but I am not sure what state they are in.  I will believe it all when I can play with it and report to you.

With the assumption that the software products are real we need to ask what impact they will have on the industry.  The short answer is that these products will be enough to freeze many decision processes until Oracle can get around to delivering a true 1.0 version for general availability.

In conception, the Oracle Cloud and Social Network sound good and they will appeal to a big audience of Oracle customers.  But they are not fundamentally different — and one needs to question if they are better — than what’s already on the market.

For example, nearly every vendor except Salesforce, offers customers the choice of where to operate its software — in the data center, in a third party hosting environment or in an Oracle sponsored facility.  Also, these customers have the choice of running in a single tenant or multi-tenant configuration.  So all the bases are in theory covered.

But this only adds fuel to an already smoldering argument of whether it is better to simply move applications from an old paradigm to a new hosting environment or if it might be necessary to take a fresh look at these applications in the context of mobile and social demands and changing business requirements.  Failing to do all that might result in well functioning applications that have diminishing relation to reality.

As Benioff has made clear for the last decade and did again at his press conference, most of those choices fit an old paradigm at a time when the paradigm is changing and the multi-tenant solution is the way of the future.  Interestingly, Ellison derided multi-tenancy as something that is 13 or so years old but ignored the idea that the conventional IT that his solutions provide for are much older still.  Moving your data center off site, which is a function of the Oracle Cloud, is not exactly state of the art.

Ellison was careful to point out the places where his cloud, for instance, was superior to Salesforce.  Oracle Cloud offers users the ability to use applications on premise or on-demand and to move applications from one to another without losses.  Oracle also works hard to assure the market that its solutions are standards based using standard middleware and programming languages.  In fact Ellison was happy to discuss the whole application stack in that context.

Big IT shops will be comforted by this knowledge but increasingly, they are seeking ways to streamline their operations and reduce the amount of labor they invest in their applications.  A discussion of how to avoid middleware all together might have been more welcome.

The new IT paradigm promoted by Salesforce and a growing army of followers is social, mobile, cloud and multi-tenant.  The new Oracle products embrace all of this but still leave it to the customer to determine when to adopt these ideas.  That is a good approach for a company like Oracle.  Ellison has a huge installed base of some 380,000 customers and they will not be converted in a short time.  So hybrids and halfway measures are the strategy and in this Oracle has played its hand well.  But it is not alone — Microsoft, SAP and many other software houses that were the leaders in the last decade have the same tricky path to traverse and the same basic approach.

What happens next will be interesting.  With these announcements Oracle has come close to parity with its competition but it is last in the race and its solutions mimic the competition without breaking much new ground, if any.  What the company does next will be vital.  Will it continue to follow the pack as a not to fast follower or will it innovate around all of the ideas bubbling up today including mobile, social and, of course, cloud?

There is enough in the announced products to enable customers to get going with cloud computing and in applying social concepts to business and there is plenty to support those who break out in a rash whenever they hear words like Salesforce.com, cloud or social.  That is right where Oracle needs to be at the moment assuming the products they announced, but curiously did not let us see or try out, really exist.

One response to “Oracle Buries the Lead”