Traditional enterprise software has a negative reputation for being poorly designed and difficult to use. Although vendors have long been aware of this problem, few genuine solutions have emerged over the years. For the most part, efforts to improve usability have been relegated to user interface projects, such as the EnjoySAP initiative of the late 1990’s. However, despite being serious efforts, these approaches left the underlying software, data, and economic relationships between vendors and customers relatively unchanged. Therefore, they did not solve the most important usability problems.

The following image shows a slide on EnjoySAP, taken from a 1999 SAP training course: 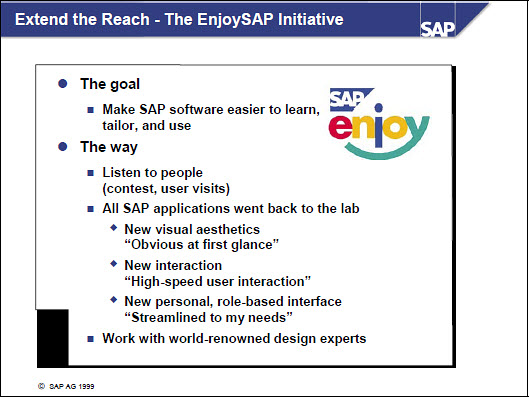 Economics and strategy lie at the heart of why traditional enterprise software is so unloved. For the most part, vendors sell these products to budget holders, who are primarily managers and executives, making end-user satisfaction a secondary consideration. When large companies buy software, selection committees focus on many factors, starting with the product’s ability to address “organizational needs.” This common approach incentivizes vendors to prioritize management goals over creating delight for end users.

Blogger Robert Scoble brought attention to this issue in an insightful video, which sparked discussion among members of the well-known Enterprise Irregulars group. Fellow member, Basab Pradhan, who is Senior Vice President and Head of Global Sales and Marketing at huge Indian consulting company Infosys, offers a pointed view:

Enterprise software still doesn’t care about users. Its focus continues to be serving executives, rather than employees, because executives make buying decisions. Therefore, we see all the song and dance about BI and in-memory computing, while employees continue to suffer with terrible UIs and no options.

Vendors that de-prioritize user needs to favor the concerns of management create two substantial problems. First, change management becomes a significant burden during many implementations, even resulting in failed projects. To see one example of this, read about the Lumber Liquidators fiasco.

The second problem that arises from poor software usability is low adoption by end users. Basab explains why this is particularly problematic in situations where users have choice:

Nowhere is the need for this more apparent than in CRM software. CRM is the one place where you can’t force employees to enter data. If people in sales don’t like the software, you won’t even know the event happened. In most other enterprise software I don’t see the compelling need for vendors to really make their products easy to use.

Addressing the disillusionment that many users feel toward enterprise software requires basic changes in the relationship between vendors and customers. The solution lies in a new breed of software vendor, mostly based in the cloud, which creates software intended specifically to delight users with simplicity and intuitive design. Prioritizing end-user satisfaction over complicated IT processes, these new companies are an increasingly disruptive and positive force in enterprise IT.

In addition to disillusioned users, enterprise vendors also face a challenge from managers who have not realized expected agility from their software investment. According to new research by analyst firm, Technology Evaluation Center (under sponsorship from Unit4 software), a significant number of managers are dissatisfied with the capacity of their ERP system to adapt quickly in response to business changes. The following slide shows a primary point in the survey: 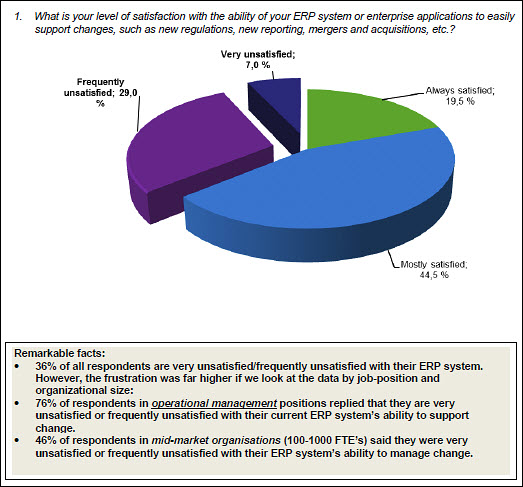 Traditional enterprise software faces challenge from several directions. On one side, consumer services have trained users to expect a certain minimum level of positive experience when interacting with software; on the other, management is disillusioned with rigid, expensive, and hard to implement systems. Even without an accurate crystal ball, it’s clear the enterprise world is changing.

What do you think is going on with enterprise software?