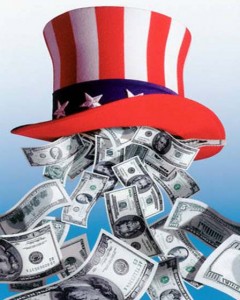 It appears that one very significant problem that the Administration and the Federal Reserve created, a frightening spike in unemployment, is the result of a massive miscalculation about how the staggering borrowing by the government would play out.

The Fed endorsed a policy of record borrowing under the theory that we were at risk of a deflationary spiral and that before recovery could be achieved we needed to “reinflate” and not worry about inflation. So far so good. A consequence of the public debt and unrestrained printing of money would be a spike in inflation but that would be beyond the horizon and have a positive consequence of reducing foreign held government debt as a result of a surging dollar, which would crimp growth but also reduce some core inflation components like energy. So far so good, we reinflate the economy and inflation puts a crimp on Treasuries held offshore thereby normalizing the entire system.

It hasn’t worked out like that, instead what is happening is that a deficit of confidence in Congress and the Administration on economic matters is translating into massive uncertainty about the future. We have entered a strange new period where jobs data is shifting from being a traditionally lagging indicator to a leading one, in other words, because of future uncertainty employers are not expanding… it’s systemic bunker mentality. Weak jobs data is leading to more weak job creation activity and the consensus view is that the Administration doesn’t know what to do and Congress is distracted by the healthcare issue.

The unintended consequence of the above is that blowtorch under the chair has shifted from Wall Street to the Federal Reserve and Treasury Department. Bernanke is pretty well insulated, he’s not asbestos wrapped but he can handle some heat, while Geithner is less protected as he is a member of the Executive Branch and as such accountable to Congress whereas the Fed is, by design, independent and largely immune to congressional oversight reaches. That won’t stop Congress from considering changes that pull back the power of the Fed but one thing is cerrtain, Geithner is not going to have a pleasant holiday season.

On Friday, Paul leveraged public frustration at Washington’s management of an apparent “jobless recovery” – and the mounting pressure on Capitol Hill to do something – to push through a controversial amendment to rein in the Federal Reserve.

One response to “The Stimulus Backlash”