It’s about that time again when bloggers and pundits start thinking about predictions for the New Year.  I took a look at mine for 2009 and was pleased I was correct at least some of the time.  One that is coming true, albeit a little later than I had hoped, is this one: 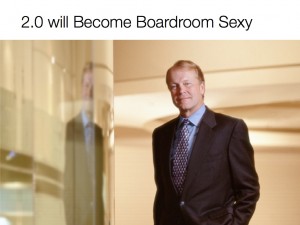 John Chambers is talking and walking the talk.  BusinessWeek has a feature this week on “Cisco’s Extreme Ambitions.”  The story details how Cisco is leveraging non-traditional methods to turbo-charge its growth and deliver strong margins to Wall Street.  One of those innovative tactics is democratizing decision-making and using a variety of web-based tools to identify talent.

‘…John Chambers and Cisco’s entire leadership are focused on driving Cisco’s growth and business results.’ Chambers admits the council structure is unusual but argues it’s the only way a company Cisco’s size can move as fast as it needs to. He says the councils work and help identify talent throughout the company.

Cisco is taking on a lot of risk and reinventing the company from the ground up driven by the  principles of 2.0 transformation.  Chambers said in his address at Cisco Live, “Organizational structures enabled by the network as a platform can change the speed and dynamics of a company.”

This is what we talk about when we’re talking about transformational change and the reinvention of work.  The end game is market competitiveness.  BusinessWeek sums it up:

In a sense, Chambers is bidding for a place in the history books. He’s trying to use the ambitious expansion and unconventional management strategy to demonstrate how a company the size of Cisco can remain fast-growing and nimble. If he succeeds, he may end up regarded as a business icon, along the lines of General Electric’s Jack Welch.

Like Marc Benioff, Chambers is betting the business.   Perfect time, incidentally, for Andrew McAfee whose ideas are now seeding The Harvard Business Review, management book shelves, and The McKinsey Quarterly.