(Humor) The Rosetta Stone of IT Industry Analysts

I recently attended the Kenexa Analyst Day in Dallas (that report will appear tomorrow). Also in attendance was fellow industry watcher John Sumser of HRExaminer. When I read John’s write-up of the event, his remarks on the following got my attention:

“You should understand these Analyst confabs. Held in an interesting hotel, they are day long gabfests where the conversation is led by key executives. The analysts get an opportunity to hear the company’s story; the company gets an opportunity to tell it. In a perfect world, the company would know each analyst well enough to deliver the appropriate slice of the picture. In the real world, companies use these get togethers as a test ground for their market pitches.

The analysts are a somewhat harsh audience, so new spin gets a good going over.”

John’s sentence that in a perfect world, vendors would know analysts well got me to thinking. What do vendors really know about us? So, here’s my analyst report on analysts. (FYI- I do lots of market segmentation work for high tech clients).  Remember, analysts are not all alike or even plug-compatible. Each one is their own piece of work – a piece that can get really bent out of shape when they miss flights, lose luggage, can’t get their cell phone to work, get stood up, are asked to sign a 10-year NDA, are hung-over, are suffering fools, don’t get their nicotine breaks or all of the above.

Here are the different kinds of analysts out there and what motivates each. (Note to colleagues: I hope I didn’t break any kind of analyst code disclosing this!). 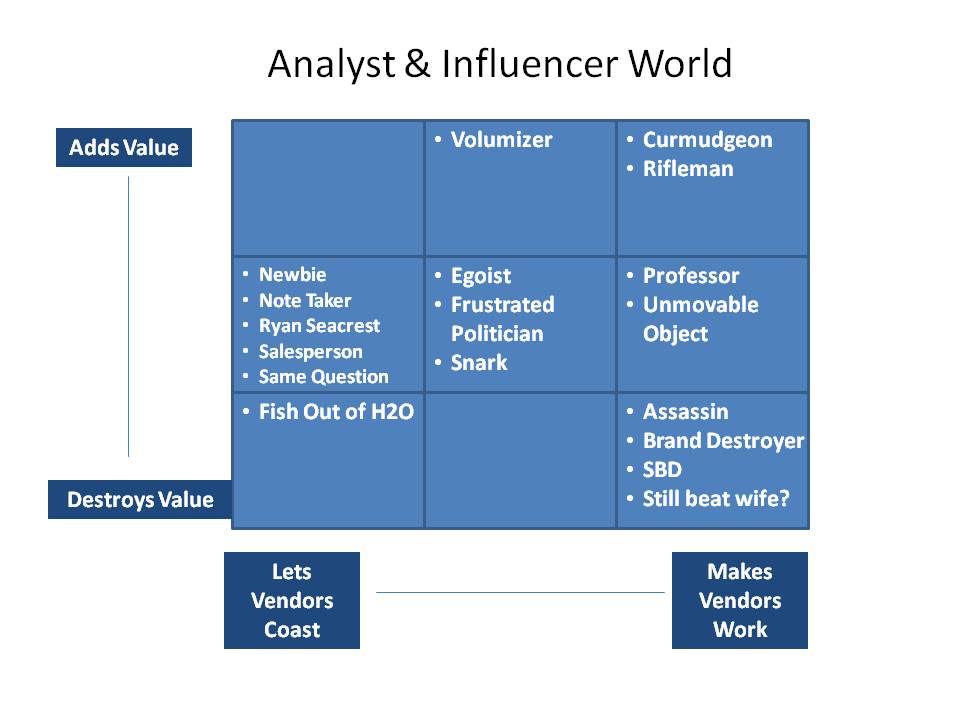 Assassin – This analyst has never met a vendor they liked, ever. They don’t have much sympathy for vendor executives or the market, financial, product, etc.  challenges before them.  The Assassin takes pride in having never written a positive piece, ever.

Brand Builder/Destroyer – This analyst builds their personal brand up by destroying the brand of the vendor. They usually write tough pieces although these pieces don’t have to be right or new. They just have to get ink for the analyst.

Curmudgeon – You could build an app that solved world hunger and the Curmudgeon would still find something to nitpick about. The Curmudgeon is not an Assassin as they are just always in a bad mood. This analyst can give praise but it often comes with some begrudging acceptance.

Egoist – Most analysts are really good but some see themselves in an especially rarified light. These über-analysts make demands on vendors that make riders in rock star contracts look tame. These folks only stay at the 5+star hotels (if they even exist), always get the vendor to provide them a limo to/from the airport, fly them first class, etc.  I guess all the rest of us working-stiff analysts should be happy that we sometimes get to periodically co-exist in the ego-centric world of these most special people. (Yeah, right!)

Fish out of water – This is someone who has hung out an analyst shingle but never did technology implementations. They might bluff well but their lack of experience eventually shines through. As analysts go, they’re usually short-lived and their inexperience is quickly apparent.

Frustrated Politician – Some analysts really want to change the world. To that end, they mix technology and their far-right or far-left politics into their writings. If you’re not on their page politically, your technology may not be on their top picks list.

Newbie – This analyst usually says nothing the whole day although some mistakenly chirp up and get eviscerated by other analysts – That’s never a pretty sight. They can go from newbie to roadkill in a single bad question.

Note Taker – A note taker just states or re-states what the vendor says. They add little or no other insight. Generally, they are not very helpful for most readers but can be a darling of many vendors, especially those that want to control the message in the market.

Purist/Theoretician/Professor – This analyst can debate the arcane, immaterial and theoretical to death. They have a deeply rooted opinion about a subject and are waiting for a chance to tangle with some vendor executive to see whose command of the subject reigns supreme.

Rifleman – To be honest, this is a role I relish but others are very good at this, too. This is the analyst that finds the shortest distance between hype and reality (or non-news and wishful posturing).  These folks call bulls**t every time it tries to rear its ugly head. This is the analyst that keeps vendors honest. When they draw first blood, then the other analysts pounce. When that many analysts pounce, it’s like a National Geographic episode on piranha attacks  (i.e., not for the faint of heart).

Ryan Seacrest (with apologies to the real Ryan Seacrest) – This analyst is always positive to the star vendors in the industry. This analyst type is always full of fawning, gushy ‘reporting’. They speak of vendor news items (e.g., the new tax table update in version 10.5.3.A41.6 of an old fixed assets application) with all the ‘exclusive‘ hype usually accorded a Kardashian engagement rumor.

Salesperson – Somehow, this ‘analyst’ always manages to mention that they have a template, framework, project, white paper, etc. that the vendor can license. I’ve heard some of these pitches enough times to sell the solution myself.

Same Question Every Year – This analyst has 1-3 questions and asks them at every vendor confab. They ask these same questions year in/out. They are an old fashioned vinyl LP that has a scratch on it that makes it repeat the same groove indefinitely.

SBD (silent by deadly) – There are actually lots of these analysts. These analysts sit through entire days of briefings without uttering a word. Then, when they’re headed to the airport they post an atom bomb of a report.

Snark – The Snark sends out a few Tweets per event but each one is a tongue-in-cheek jewel (e.g., “What’s the difference between Vendor XYZ and a bowl of yogurt? Only one of these has a good culture!“) . These are the analysts whose short pithy stuff everyone loves to read. They’re entertaining but may not deliver the longer, in-depth reviews.

Still beat your wife? – This analyst spends hours perfecting the most impossible questions for vendor executives to answer without coming off badly. These are the questions the vendor’s PR team has tried to prepare executives for and hopefully, they won’t take the bait.

Unmovable Object – This analyst has an opinion that no amount of facts will convince otherwise. He/She takes stubborn to all new levels. They steadfastly maintain their viewpoint no matter how many others have already weighed in on the inaccuracy of it.

Volumizer – This analyst sends 60-300 tweets per briefing along with 4-6 blog posts per hour.  I’m never sure what they actually capture during the event but analysts like me often find our questions/comments in their content. Personally, I like that they help promote my brand.

Now, before my peers castigate me for doing this, remember that I believe many of you fall into several of these categories (often in the same day!).  Also, I am pretty confident that I missed some important categories. So, let’s make sure that the focus of any feedback on this post is only to address the omissions.

–          “Yes but Brian, you would have already known this if you had licensed my industry leading best practice guide to analysts” (from a Salesperson)

But vendors – It’s you I want to hear from. Am I even close? Did I forget any category?

2 responses to “(Humor) The Rosetta Stone of IT Industry Analysts”