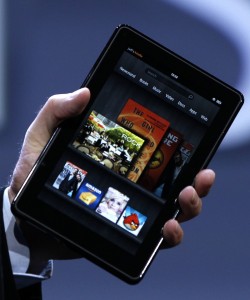 Got my Kindle Fire a few days ago, eagerly anticipating a morning of shiny new object joy followed by a nice Thanksgiving dinner.  No joy.  My Kindle Fire will not connect to WiFi and it can’t do much of anything without it.

This is rapidly becoming a known problem.  The Amazon support boards are filled with people reporting the issue and Techcrunch also ran an article.

Lots of placebos are being discussed on the support boards and I tried all of them with no success.  They range from the usual Customer Service we-don’t-know-what’s-really-going-on-but-we-need-to-get-you-off-the-phone answers like reboot, retype your password, yada, yada, to voodoo around whether it supports all the different WiFi protocols (some say “B” is the culprit and if you set the router to G or N you’re fine) and so on and so forth.  There is an update, 6.1, that some claims fixes it.  I have to go scare up the right serial cable to try that, but many report it didn’t help so I haven’t been in a big hurry.

One comment on the Tech Support board tells the story:

“Amazon, you know you have a problem, and you know you’re not going to announce it until after Black Friday’s sales have ended, but you had sure better have an easy fix for it or you’ll be facing millions of returns.”

I attempted to get Tech Support via email, but their response was simply a note that said sorry, can’t help unless you call in.  Not what you’d expect to hear from the would-be premier Cloud company Amazon!

I would’ve expected that with as many as are reporting the trouble, they would have a coordinated response to keep the situation under control and hopefully get it fixed.

BTW, if you choose to ignore the initial setup and just dive in, the overall UI is pretty confusing.  It keeps asking to connect on most anything you do, you click the connect, and nothing happens.  There’s no feedback about whether it connected or not, but in my case it did not.

The device looks like a nice form factor, and I wanted some kind of Android device in the house amid our sea of iOS devices.  So far, not impressed.  I will eventually make that support call, probably tomorrow so as not to spoil Thanksgiving Day, but unless it is actually helpful, I’ll be returning the Kindle.

12 responses to “Wait Before Buying a Kindle Fire: WiFi Problems”