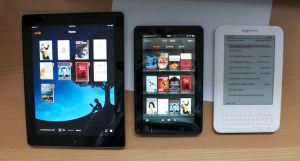 I wanted to follow up on my unhappy post about Kindle Fire.  When I first got the device, I couldn’t do anything with it because I couldn’t connect to WiFi.

As a quick aside, having had side-by-side 3G and WiFi on my iPad, I really like having the 3G and frequently turn WiFi off.  I have found it is a real hassle connecting to Hot Spots compared to the ease of 3G.

The good news is I was able to get my Kindle Fire to connect.  I did a ton of research on the web, tried to get help from Amazon Tech Support, but basically got nowhere.  Despite hearing many accounts of people with a similar problem, there were also tons of people out there having no problem at all.  Ever the optimist (Engineers always are), I gambled that maybe the problem wasn’t so much my Kindle but perhaps it was my router.  Now granted, every other wireless device in Da House connected to that router just fine, but it was really old, and it was really easy to bop over to Staples and pick up a new router.  For the record, the router I dumped was a Belkin N1.  I planned to buy another just like it, but discovered once I got to Staples that it seemed like the router world had undergone a makeover.  Okay, so I bought a sleek Cisco router for $79.  I plugged it in, and voila, the Kindle Fire immediately started working.  I will probably try to configure that Belkin to be another access point as I can’t quite get WiFi everywhere in the house, so I will get some value beyond just getting the Kindle Fire to work.

Folks who have older routers may want to consider replacing them.

Many are saying the OS update to 6.1 fixed their problem, but they had to side load that with a cable.  I didn’t try that because I didn’t have a mini connector USB cable on hand.  The first thing my Kindle Fire did was to download that update and it all went very fast.

Well, so how good is the Kindle Fire?  Here are my thoughts:

First thing is, I would not want to trade it for my iPad, which is what a lot of people are saying.  I would say that the difference between a laptop for casual things and an iPad is about the same as the difference between an iPad and a Kindle Fire.  In other words, iPad is a more powerful, flexible device.  But, for what it does, Kindle Fire is really cool.  I also like the UX on the Kindle Fire.  It makes it an extremely intuitive appliance for content consumption.  It is even further from the laptop in terms of being a general-purpose computing device (I don’t hold with all these silly linkbaiters claiming PC’s are dead), but that’s fine if you want a great content consumption appliance.

Some are saying the Kindle Fire has lousy or no Industrial Design, but I disagree.  The physical hardware is about as cool as it can be while keeping the price down.  I do wish they had splurged on the hardware switches the iPad has to lock the display orientation or to change volume, but really it isn’t that big a deal.  The software UX, where it doesn’t especially cost more to do a good job looks great.  There are a lot of little touches that make it nice.  As Ars Technica says, “Love, love, love the lock screen photos.”  Good review over there, BTW.

I’ve been using the two interchangeably for web browsing, Kindle book reading, and Movie/TV watching.  Having Amazon’s content available as a first class part of the Kindle Fire UX, and particularly having all the free stuff that comes with Amazon Prime is just bloody awesome.  It feels like a great value and it is great fun to use.  It’s biggest advantage over iPad is all the free video movies and TV episodes.  Streaming that stuff is easy and it rocks.  I’ve been watching old episodes of Star Trek, the X-Files, and 24, you know, the usual Geek stuff.  The little 7″ screen is 1024×768, and when it is sitting on your chest 6″ in front of your nose it looks awesome.  I started noticing some detail in some of these episodes I’m familiar with that I’d never noticed.  Sweet!

In terms of reading things, the display is crisp and readable, but I much prefer the iPad.  It’s bigger, the fonts are a little bigger, and it just seems a better vehicle for me to consume email, read blogs, or read a Kindle Book.  Given a choice between no tablet or a Kindle Fire, the Kindle Fire is an awesome experience for reading, its just not an iPad.

The Kindle Fire form factor is interesting.  It’s about the biggest thing I could comfortably hold in my hand.  I could see a lot of things being very convenient that way.

Last point, my wife has staked a claim on the Kindle Fire and made it clear that I need to get done “reviewing it” and pass it along to her.  She’s got a 2nd gen Kindle Reader she loves, and she sees this as her upgrade.  I think she’s right, BTW.  She also loves the video (and watches a lot more TV than me, so ought to have it), and she has already confirmed and likes the fact that it fits conveniently in her purse, which was never a possibility for the iPad.

All I can say is that when the Kindle Fire leaves me shortly, I am really going to be wishing my iPad had better video support!