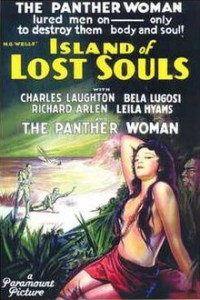 When Ron and I moved near DC in 1977, there was a late night TV program, called “Creature Features,”  that we loved.  It was hosted by Dick Dyszel  who, for reasons lost in the mists of marital life, I nicknamed Lars from Mars.  Dick played rarely shown early SciFi films, many black and white and loaded with zombies and other scary creatures.  A particular favorite of mine was the 1932 Island of Lost Souls (the trailer is here).

Now this host was as much of a draw as the films he played.  He was outrageous in many ways, but what always struck me about him was that his movie critiques were VERY astute, very well-informed, very sophisticated.  Lars from Mars, as I called him, was one smart cookie, especially when it came to promoting his program.  So perhaps that’s why, from my first awareness of Lars Dalgaard and his ambitions for SuccessFactors, I’ve always called him Lars from Mars (not to his face — yet!).  I’ve considered him a force with which to be reckoned — and not just in terms of strategic HRM software.

So, when I got the press release around noon on Saturday 12/3 (and notice that I’m not fussing about the intrusion into my weekend), nothing could have made me happier than the ensuing orgy of attention paid to the importance of HR tech in the wake of SAP’s enthusiastic, some even suggested desperate, acquisition of SuccessFactors.  The sheer joy of having every major business news writer focused on how HCM “in the cloud” is going to lead SAP to that promised land for the rest of their product portfolio was almost too much to bear.  Yes, my friends, HR technology is going to lead SAP to the SaaSy promised land, and Lars is on point to get them there.

Then, just as the excitement over all things HR tech appeared to be dying down, none other than Marc Benioff, CEO of Salesforce.com and the cloudiest of cloud potentates, took us even closer to the pearly gates.  Marc declared that not only would HR tech take us to the cloud, but it would socialize us along the way.  With his acquisition of Rypple, and putting one of the most well-respected applications development leaders, John Wookey, in charge of a new business unit dedicated to cloudifying and socializing HRM in one fell swoop, Marc reinforced the belief — true of course, but not everyone knew it before 12/3 — that I’ve been living at the center of the known enterprise software universe throughout my career.  I may even, as a result of my first payroll programming efforts, now qualify for an IT pioneers badge a la Rypple.

So now I’ve got this movie in my head of The Wookey, Lars from Mars, Carmen (aka Steve) Miranda, “Stan the Man” Swete, Al (aka Mike) Capone, Buck (aka Adam) Rogers and (in my movie, it’s a crowd scene) more, all wearing their Naomi Bloom t-shirts (you know, the ones with my avatar on the front) and doing the HRM SaaS InFullBloom rumba.  And now you’ve got my movie in your head!