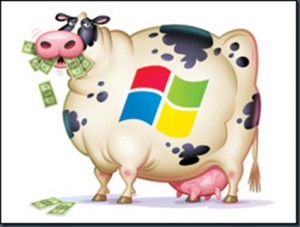 Microsoft is frequently cited as an undervalued stock and a profit machine.

But the Innovator’s Dilemma is meeting the BCG Matrix at Microsoft – right now – as the advent of cloud computing destroys the value – and profitability – of their primary Windows and Offices franchises. To the company’s credit, they have recognized the challenge and aggressively attempted to respond, but the financial impact is becoming clear.

Microsoft traditionally sold packaged software that, once developed, costs little to manufacture and distribute. In moving more business to the cloud, the world’s largest software maker must take on the costs of running data centers. These expenses include powering, cooling, housing and maintaining servers that run the programs for clients.

Mark Moerdler, an analyst at Sanford C. Bernstein & Co., estimates that cloud-related costs will range from 15 percent to 25 percent of revenue. That’s about 10 percent more than selling standard packaged software, he said.

Microsoft is in a very tough spot. Like him or not, you really don’t want to be Steve Ballmer right now.