It’s that time of year again. Enterprise social media has had an impressive ramp-up in 2011 as well as being well-poised for a banner year in 2012. However, along the way, social business has become a very broad topic indeed, covering a wide range of topics that ranges from social marketing and Social CRM to collaborative product development and Enterprise 2.0, with a good number of specialty niches in between them for good measure. This includes social HR and talent management to social business intelligence and social business applications, to list just some of them. It’s fair to say that in 2011, social pervaded a truly wide swath of territory in terms of business capabilities. While social reconceptions of traditional business functions began showing signs of some maturity in select areas (especially social marketing and internal collaboration), strong early adoption was also a hallmark of a few quite recent developments, in particular Social CRM.

Thus, with all this activity, it’s not surprising that it was at the beginning of this year that some estimates of the total investment in the social business industry exceeded $100 billion, an impressive figure for an industry that’s just about five years old. The big question for those now investing in and promoting social business approaches in their organization is, namely, what’s coming next? Are there any new major new insights that will reshape the field? The examples of hard won lessons of years past, such as the need for community management in most social business implementations or that social business should be connected to the flow of work, have been critical ones. What else have we learned? 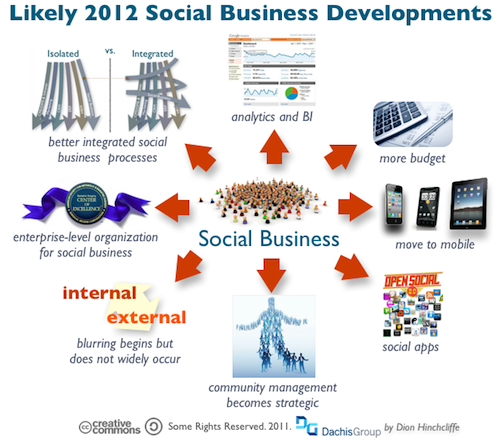 It’s from this perspective of significant impact that we take a look below at what’s likely to happen in social business next year. If it’s not a major issue or a likely improvement on what’s taken place this year, I’ve generally not included it. In addition, I’ve only tried to include high probability trends and predictions so that those planning their social business strategies for next year can take them into account. If something is particularly speculative, it’s been highlighted in text.

This is a lot of issues for social business practitioners to keep track of and activate on, but that’s always the case with fast moving new industries. Social business has made major strides this year and I anticipate that 2012 will be a truly breakout year, across the board, for organizations that are prepared to plan and invest. However, no list of predictions could possibly be complete and I’d be very interested in hearing your predictions in comments below.