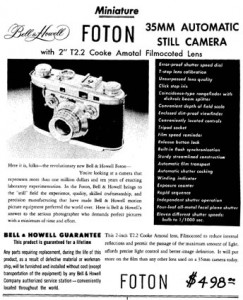 A Page From Bloom’s Camera 1950 Catalog

On Christmas Eve, my Dad’s retail camera shop closed early, and we knew we’d have him with us all that next day.  Really just with us, even if he was too tired for much conversation after working the very long hours of the retail Christmas season.  New Year’s Day was for taking inventory, and it was all hands, even my very small hands, to the wheel.  But Christmas Eve and Christmas Day were really special.  Time alone with my father Jack Bloom, who ran a modest camera shop with his brothers Paul and Herman (who published his “romantic” novels under the name Harmon Bellamy), was rare and precious.

When I was really young, my Dad left for work before dawn and rarely got home before I was put to bed.  Friday nights were usually spent having Shabbat dinner, with all my Bloom aunts/uncles/cousins and even great aunts/uncles (those without their own children), at my grandmother’s house.  After dinner, Dad went off to Schul with his brothers.  On Saturday mornings, we were all off to Schul, but we were orthodox so only my one male first cousin Elliot got to sit with his Dad.  The store was open on Saturdays, so my Dad, in spite of the Orthodox prohibition against working on Shabbat, went from Schul to work on many Saturdays, especially if they were short-handed by employee illness or vacations.  Summer Sundays were for golf in the mornings and family time in the afternoons, often spent visiting family who lived far away.  In those pre-turnpike (yes, before there were highways, there were turnpikes) days, the trip to Hartford, less than thirty miles away, took well over an hour.  But on Christmas Eve and Christmas Day, we didn’t go visiting; we stayed home so that Dad could rest, and that meant me sitting beside him as we watched TV (once we had one) or read from the World Book Encyclopedia.  My Dad was a great reader, something my sister and I have “inherited” from him.

In the run-up to Christmas, everyone worked long hours, and it was rare to see my Dad during December.  My cousin Ronni and I, from about age seven, ran the strange machine in the open mezzanine above the shop floor that took addresses on metal plates and transferred them to labels for the Christmas mailing of catalogues (like the one pictured here) and calendars.  Long before it was fashionable for small businesses, Bloom’s Photo Supply was into direct marketing, and we carefully collected the names and addresses of every customer and caller, all of which were entered in the perpetual address files that my Uncle Herman kept.

Sitting in the mezzanine, Ronni and I bickered over whose turn it was to load the metal plate (not fun), load the next item to be addressed (not bad), or turn the wheel (most fun) and discussed what we saw going on all around us.  Excess inventory, the bane of every retailer then and now, was a major topic, along with fanciful ways of getting rid of it profitably.  While I can never be sure, I think those conversations with Ronni must have been the origin of my now famous story about the invention of Christmas as an inventory management scheme.  In that story, the wise men were retail merchants who saw in the humble birth of Mary and Joseph’s son a solution to the already age-old problem faced by retailers everywhere of how to ensure that the year ended without extraneous, highly unprofitable inventory.  This is one interpretation of the Christmas story that my Christian Wallace family had never heard until they met me.

By the time we were ten, Christmas season found Ronni and me, the two youngest Bloom cousins, helping behind the counter after school and on weekends, ringing up sales, selling film and other simple products, watching for shop-lifters (you thought that was something new?), recording those sales in the perpetual inventory files kept by my Uncle Herman (there never was nor ever will be again a filer like my Uncle Herman!), and generally learning the business.  Everyone worked, including our mothers who were otherwise traditional homemakers, during the month before Christmas, and by Christmas Eve, we were all exhausted. But the lifeblood of retail is the Christmas shopping season — always was so and still is — so our family budget for the next year was written by the ringing of those Christmas cash registers.  And I can still hear, ever so faintly, that special ka-ching when I’ve made a big sale.

My Dad was buried on my 50th birthday.  My cousin Ronni, just four months younger than me, died in her mid-thirties.  Cousin Elliot took over the business from our fathers, built it into something completely non-retail but VERY successful, and sold it many years ago.  But if you’re ever in Springfield MA, you can still see the four story mural of long gone camera and photographic supply brands on the exposed wall of Bloom’s Photo Supply’s last retail address, on Worthington Street just up from Main Street.

For me, sitting in my usual place at the keyboard, Christmas Eve will always be special.  Years after my Dad retired and I had a business of my own, we talked daily, with me updating him on my business in response to his questions.  You can’t fail to hear the ghosts of a retailer’s Christmas past even as my very non-retail business thrived.  ”How’s business?”  “Business is great.” “Are your clients paying on time?  “They sure are, Dad.”  “And are their checks clearing the bank?”  “Absolutely.”  This Christmas Eve, I’d give every one of those checks for another Christmas with my Dad.

Disclosure:  If you think you read this last Christmas, you’re quite right.  And you may read it again.  I learned so much about business through my pores as I worked at Bloom’s Camera (later, Bloom’s Photo Supply and then just Bloom’s, Inc.), lingered at my grandmother’s kitchen table after Friday night Shabbat meals where all the important decisions were made for that business, and was then apprenticed to all the other small businesses run by various non-Bloom relatives.  I went on buying trips to New York for the fancy ladies wear shop run by one aunt (they used to model the dresses at high end shops), learned the uniform business from another aunt, and was taught the basics of the Borscht Belt hospitality business by a great cousin.  By the time I got to my MBA program, cash flow, supply chain, human resource management and more were already baked into my world view.