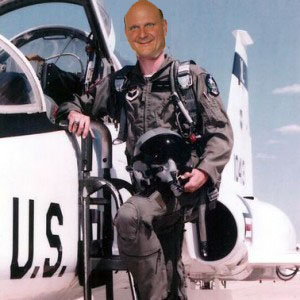 Wondering where that crazy title and the photo came from?

First, check out Steve Ballmer’s early pre-Microsoft career.  He was the Product Manager for Proctor & Gamble’s Moist N’ Easy Snack Cakes.  No harm in that, in fact he apparently sat near Jeffrey Immelt, who would eventually rise to become one of GE’s celebrated CEO’s.  Okay, what about the fighter pilot thing?  That would be a reference to fighter pilot John Boyd (he looks sorta like Jimmy Wales dad if the right photo comes up on the Wikipedia ad), whose “OODA” strategy is what Microsoft is missing most these days.  I’ve written about Boyd a few times before, and this is perhaps my best article to date about Boyd and his “OODA” strategy.

My thoughts are motivated by a recent post from Microsoft GM of Windows Phones Charlie Kindel.   Kindel can’t understand why the Windows Phone hasn’t been more successful, because he feels it is superior to the alternatives, and particularly to Google’s Android.   He argues in his post that the Windows Phone isn’t more successful simply because Google has less friction in its dealings with the Carriers.  He says that App Developers are mostly irrelevant.  That statement alone leaves me in little doubt about how App Developers should feel about the platform, and it isn’t good.  That’s not all, he further goes on to say that End Users just do what they’re told by advertising and retail sales professionals.  Oh my, Charlie, are you sure you want to be on the record for that too?

Despite all that, he never really does say why the Windows Phone is a superior product, he just asserts that it’s true.  With GM’s like this, its no wonder Microsoft has a problem with their phone.  But the problem actually starts pretty far from one GM and his views, however misguided some like me may think they are.  MG Siegler’s Paris Lemon blog has it right in three words, “Way Too Late”, and this is the problem Microsoft has in general.  Scoble adds further clarity by pointing out that when people buy things, they want to make sure that what they’re buying doesn’t make them look stupid.  In this context, what that means is if they’re going to choose to deviate from the well traveled paths–buy an Android if you want Open/Cheaper or buy an iPhone if you want Best Product–there had better be a really obvious reason to choose to be different.  One they can point out to their friends and get some kudos back for.  It has to be a defensible decision.  Because people hate when their buying decisions make them look like idiots, especially for an obvious visible status symbol and piece of Tech Jewelry like a cellphone.

Markets move by punctuated equilibrium (call it a paradigm change if you prefer, but I like the evolution metaphor) followed by periods of slower innovation and consolidation.  The punctuated equilibrium happens when some massive innovation hits that makes the new product look like a whole new category, and not just an incremental improvement over some other.  Apple and Steve Jobs have made a huge business and a career out of punctuating our equilibriums.  Not long after punctuated equilibrium, the commoditizers show up.  Their job is to give you 80% of what the innovator did at a much lower price.  Let’s not confuse the commoditizers with fast followers.  The latter are more about perfecting an idea that got launched a little before the innovation was done and understood.  Facebook did an awesome job fast following MySpace.

What does all this have to do with OODA?

Let’s start by defining Boyd’s OODA strategy.   The acronym “OODA” stands for Observe Orient Decide and Act.  I’ve written about OODA in the past and enjoyed Boyd’s writings on the subject, which are excellent strategy musings.  Given that it is a strategy evolved for fighter pilot dogfighting, it should come as no surprise that it is primarily a competitive strategy.  The steps are as follows:

–  Observe what the competition is doing.

–  Orient that observation to the market: what does it mean?

–  Decide how you want to react to it.

–  Act on that Decision.

An “OODA Loop” is a complete cycle of gathering the information, deciding what it means, and acting on it.  It is your decision making cycle for change.  Companies alternate between that decision making and the execution needed to deliver the result.  Now here is the important trick:  if your company’s OODA decision loop time is faster than the competitor’s, you will force your competitor to constantly react to your moves and they will fall further and further behind.  Ideally you obsolete their work after they’ve spent as much as possible of the cost and not yet gotten much benefit for it.

Once upon a time, long ago, Microsoft was in a decent position, OODA-wise.  They would see something some competitor was doing, and copy that innovation quickly enough, and with the force of plenty of capital and moementum from their various monopoly businesses, that they had already absorbed the competitive advantage and taken it for their own before the competitor could complete another OODA-loop and develop a new competitive advantage.  For example, they sucked the juice right out of Apple’s Macintosh GUI quantum leap with Windows, and did it fast enough to blunt the Mac’s advance for years.

But, somewhere along the way, things changed and Microsoft didn’t.  The Tech World’s notion of a good OODA Loop got a lot shorter.   Agile techniques were introduced.  Lighter weight and more potent tools replaced the old monolithic C++ style tools.  Apps moved first onto the web and then into the Cloud.  Pretty soon we reached a world where major OODA innovation cycles started taking 1 year, then 6 months, then quarterly, and now monthly in some cases.  Meanwhile, Microsoft never retooled.  Their OODA innovation cycles never seem to get it done in a year, let alone a month.  It takes them a good 3 years to show up to battle, at which point the dog fighters have moved a long ways from the point where Microsoft had aimed.  The puck had come and gone, and they never were skating to where it would be.

This is not the end of the world if a company is an amazing innovator.  Apple doesn’t create the next amazing iOS device in a month either.  But when your business model is to copy and commoditize the innovations of others, it’s tough to be 3 years late to the party, especially for hardware.  With that much lead time you’re no longer delivering a fresh idea at a great price and the incumbent also has the advantage for hardware of having built up a potent supply chain so their own cost basis is lower.

Fundamentally, Microsoft has to learn how to be far more Agile because it lives in an Agile world.  There have been glimmerings back in the Gates days, for example galvanizing the company during the browser wars, but it has been a long time since the Redmondians have been able to turn the ship so swiftly.  If those days are truly behind it, it’s going to be a struggle just to hold onto what they already have in hand, let alone grow.  They must either get much more Agile or much better at Kinect-style innovation (i.e. equivalent innovation much more frequently).

We can look at these different styles versus decision loop speed something like this: 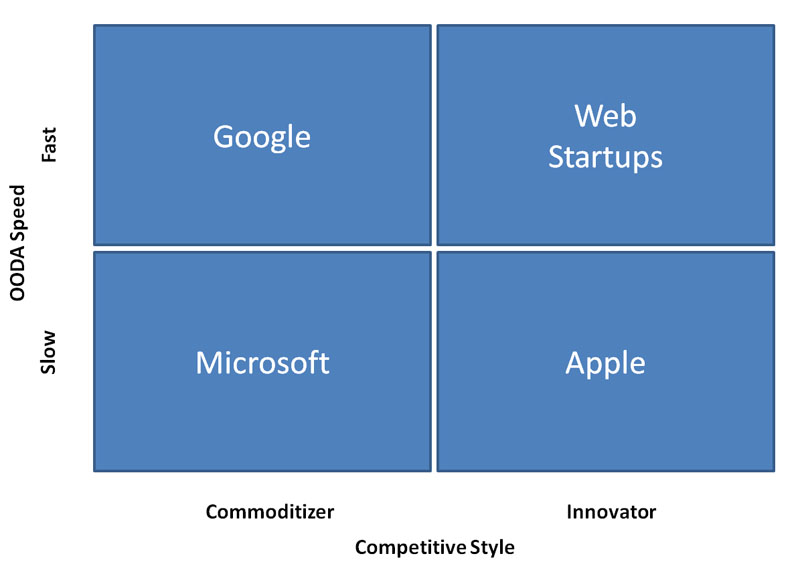 Google and Microsoft are largely commoditizers.  They bring other people’s innovations to the market more cheaply, sometimes by copying, sometimes by acquisition.  They probably don’t like to look at it that way, but it is largely what they’re doing.  The exception is Google’s search business, which they can argue they innovate in, and of course there will be exceptions for MSFT too.  But the important insight is that Google seems to be more Agile, perhaps because of their web upbringing.  They can turn that crank faster and get inside the OODA loop of others.  The Innovators are dropping the dinosaur killers into the pond.  If they are secretive and hide their innovation until it is ready, as Apple does, and if the innovation is truly a revolutionary dinosaur killer and not just a little bit of evolution, they can afford to be pretty slow delivering these innovations.

But, both Commoditizers and Innovators are subject to the OODA loop.  If the market’s reaction to what the players are doing, and the market is driven by the player’s actions, is faster than your OODA decision cycle, you lose.