The Real Mega-trend in IT. Hint: its not social, cloud, Big Data 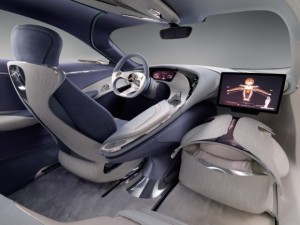 So, by now you have read a bunch of last year’s trends and forecasts for this year. You probably have your favorites – cloud computing or Big Data, maybe?

Talk to CEOs and the big excitement is about what is on display at CES in Vegas this week. No, not ultrabooks – but technology which is showing up in “smart” products and services no matter which industry they are in.

Why? Because while clouds bring efficiency, social brings feel-good, Big Data improves intelligence, technology in products bring revenues and margins. That’s the mega-trend – technology is moving from process to product.

This year’s CES, with a keynote from Mercedes CEO Dieter Zetsche accelerates what I describe in Chapter 1 of my upcoming book from last year’s CES.

“There was Walgreens—yes, the pharmacy chain—showing off its  Refill application that allows you to scan the bar code from a previous  prescription using a mobile phone, transmit it, and get a text message  to go pick it up at a nearby store….Whirlpool showcased its Duet washer/dryers with LCD screens and various laundry apps designed to give users advice on stain removal and other laundry questions… Nike introduced a GPS-enabled Sportwatch developed in collaboration with the navigation vendor Tom Tom… Ingersoll Rand showed off tech innovations around its Schlage home security and Trane thermostat products… Ford chose to unveil its all-electric Focus at the CES show rather than at the traditional car launch showplace, the Detroit Auto Show, which was only a week later….Not to be outdone by Ford, GM showcased a retail, boxed version of an OnStar-equipped rearview mirror…. 3M showed off its Patterned Transparent Conductors (PTC).”

As IT moves into product and services, ironically the really critical technology projects often organizationally move away from the IT department. Daimler (yes, the Mercedes folks) has more than 1,000 software engineers in their R&D group, compared with hundreds of others who support internal IT systems like SAP. As IT moves into product, companies need their technicians to be far more design savvy. They need their IT and their IT vendors to be more paranoid as product rooting and hacking becomes more sophisticated. It needs them to rethink IP issues. It needs them to be socially savvy during product launches. My book goes into 12 attributes of this new IT.

We live in exciting times. To some degree the current landscape is a throwback to the 1960s and 1970s, when we dreamed of competitive advantage through technology. Sabre, the American reservation system,  and American Hospital Supply were spoken of fondly for changing their industries.We have a similar opportunity now, but in most organizations
the IT group and budget and most vendors are still primarily focused on the back office and process improvements, not enough on product or revenue or growth.