Please don’t run for the door – you won’t hear Gregorian chants, ye olde english, or be forced to eat boar legs with your hands.

Not that kind of Renaissance.  Promise.

Remember when we learned about the Renaissance period in school? Me neither — thank heavens for Wikipedia!

The actual Renaissance was the moment the Middles Ages were over and we fully began to embrace the Modern Era.  This was the time when Art ruled the way (we did not have iPads back then, nor were there discussions of cloud-anything other than when talking weather events, and Steve Jobs was called Leonardo Da Vinci) for humanity becoming more adept at dealing with the day-to-day problems and building a better future.  Without the Renaissance period and the people with big ideas in it, we would have never had the industrial revolution, cures for diseases that ravaged humanity — or even toilets and sewers (we probably would’ve, just much later – but works better for the post if you imagine no toilets or sewer lines and ravaging diseases). 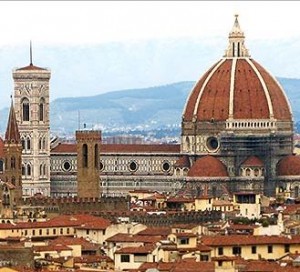 If you ever spent any time in  Florence, Italy and look at Il Duomo or the other buildings and sculptures and wonder how in the name of what they were able to build that without tools — the ingenuity of the Renaissance citizens was the how.

As it turns out, today we use the term very loosely and haphazardly to indicate a bridge between two moments in history, a time of transition.

By now you are going — well, nothing I can print here.  Let’s move on and make my point.

I was a guest in the radio show “Coffee Break with Game Changers” on 12/28/2011.  The topic of the show as to make predictions for 2012 – something I hate to do, since most predictions anyone can make for enterprise software are bound to take far more than 12 months to be implemented/adopted/embraced and results visible, but I digress.

I wanted to talk about the many conversations I had with Business Unit Managers, CIOs, CEOs and other managers and executives in the past two-to-three months while helping them prepare for 2012 budgets and priorities.  I wanted to contribute all their plans for learning and embracing the change that social is bringing; how it is not about the tools (although the tools have been useful so far to quickly prove value in social channels); how they are eager to find use cases and situations where social can contribute; how they consider Big Data a distraction more than anything at this point; how, in other words, they are getting focused on the results they are trying to achieve in their organizations by bringing in social.

As I was getting ready to spend 10-12 minutes covering all this I was told I only had 1-2 minutes (including my intro) to say what I wanted to say.  I had to come up with a way to express all that quickly — and that is where the title of this post came to mind: 2012 is the year we see the Social Renaissance in sight.

It is the year when we begin to shift from the obscure process of “going social” to the strategy of embracing social channels for collaboration and co-creation.  It is the year when the Social Customer goes from being the squeaky wheel that gets the grease (who is tended to first on Twitter or Facebook regardless of their position and value to the organization) to having one more data element added to their system of record (good friend Paul Greenberg wrote about this recently as well in his two part series on Engagement as the next level for the Social Customer).

It is, in other words, the year when we begin to figure out how to cure Black Plague, build indoor toilets, and lay down sewer lines in our social initiatives.

We are building Social as an infrastructure, not as a revolution anymore.

Looking forward to it?

One response to “Social Renaissance in Sight”