Consumerization in 2012: Cloud and mobile blurs into other people’s IT

The neat and orderly world of IT planning, architecture, and governance is never going back to way it used to be. One of the wrenching realizations in today’s already harried enterprise is that IT is steadily losing its grip over technology. Cloud software is becoming so ubiquitous that it’s getting more difficult to block effectively. Along the way, workers’ new personal mobile devices have become the ideal IT appliances, dispensing software instantly at the click of a button inside an app store from a seemingly endless selection. The latest data from a new Compuware survey shows that CIOs are now feeling the pressure acutely. They increasingly feel like the proverbial Maytag repairman, waiting for the call from the business that ever comes.

It really shouldn’t come as a surprise, when workers have the richest selection of apps and services available to them in the history of computing that is simultaneously easier and cheaper to acquire than ever before. To say that the often-stodgy and frequently under-resourced IT department is hard pressed to compete is an understatement. There are now countless Web apps (say tens of thousands, conservatively) and hundreds of thousands of mobile apps for iOS and Android available today. App stores have also made software acquisition by end users safer and more secure than ever before. Enterprise app stores are tapping into this model and springing up by the dozens, eager to tap into the unmet demand for IT solutions inside organizations while actually giving the IT department some level of control over distribution and management. 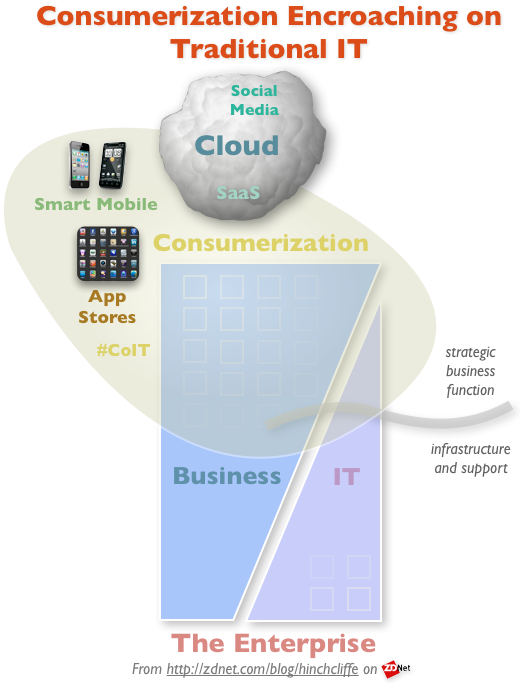 The overall trend towards ad hoc adoption of personal and cloud technology at work seems to be inexorable. More and more IT is moving out from under the CIOs budget, just over 30% by some estimates. Perhaps most disruptive of all, however, is the sudden appearance of extremely stiff competition for IT services. While the move to self-service IT in general has been a steady trend for a decade — and which is starting to be called CoIT — it’s the outright diversion of business budgets directly to external IT providers, whether they are the newer SaaS vendors and app developers or the more traditional IT consulting firms and VARs. In short, the business likes the selection and service it’s getting elsewhere, and routing around IT in many cases.

To be sure, while the CoIT trend has been steady, broad, and deep, a lot of core IT isn’t going away any time soon. Many organizations simply can’t or won’t allow it and will expend considerable resources enforcing strict discipline to use their own IT, especially in regulated industries. However, this very issue is actually a call to arms for many business users, particularly younger workers. One reason is that the old, classical IT itself is often terrible; it’s hard-to-use, time consuming to interact with, unpleasant, not easily changed, and infrequently updated. A casual glance over the fence to the cloud and smart devices like tablets makes the equivalent IT solution look very appealing in comparison. And it’s highly accessible. Few would argue that SaaS and mobile apps are very consumer-friendly and usually significantly more elegant in terms of usability, with the latest features, frequently updated, and highly customizable. Why? Because they must compete for users with their competitors on a daily basis, something IT hasn’t had to contend with until recently.

What’s more, whatever the SaaS solution, there’s often a native mobile version in the app store, making it even more convenient for today’s on-the-go knowledge worker. Research has confirmed a good percentage of workers will take matters into their own hands, particularly if it’s not a system of record. Or sometimes even when it is. The Economist has dramatically called this the War of the IT Worlds. What’s more, supported well, this might actually be good for the business.

So the numbers show it spades: IT is losing control. While this is not really a new story, what is new is that we now seem to be headed for a tipping point. It might be here for some companies this year, or it might be in three or four, but it will almost certainly come soon. And the tipping point this: When most IT is no longer under the control of IT. We are not far off from that now as a global trend, only 20% or so more IT has to fall under the business for this to happen. And it will. There’s just too much new IT emerging for our traditional IT organizations to handle using the processes we use today. I’m now telling IT managers that they should expect to handle 10 to 100 times more IT in the next couple of years, or it will just flow around them. This is a generational challenge that will reshape how we apply technology to business.

Related: The “Big Five” IT trends of the next half decade: Mobile, social, cloud, consumerization, and big data

Of course, the headaches and heartaches this will ultimately cause for companies and careers has the potentially to be great indeed. The neat and orderly world of IT planning, architecture, and governance is never going back to way it used to be. Data security, application portfolio management, master data management, service-oriented architecture, service delivery, compliance, record retention and more will all be affected. And to be honest, this is where IT has great strengths. When I took a look at the big five trends in IT late last year, I discovered a critical role for IT in enabling these trends, not holding them back. The harder that centralized control attempts to keep the genie in the bottle, the worse the ultimate outcome will be by delaying needed structural and process changes.

So it’s a move to other people’s IT that’s the agenda today. It’s embracing consumerization and making it work for the business. In the future, IT will largely not be created, controlled, or directed by IT departments, but hopefully well supported, managed, and influenced by them. The sun is setting on the old notion of the information technology (IT) department, just like it did for our MIS and data processing departments just a two or three decades ago, respectively. While definitely an uncomfortable subject (I’m eager to see the comments below), we are apparently on the verge of another IT revolution: We are entering the era of where having an information enablement (IE) capability is what the IT department’s primary responsibility is; an IE department if you will. Centralized control is giving way to decentralized innovation and solution consumption at the point of use in the business. In the very near future, most IT will come — be hosted and managed — from the cloud, app stores, or somewhere else. Transforming IT into IE may be the only way to stay connected to the business, otherwise maintaining on-premise infrastructure and legacy apps will be the (needlessly limited) future of IT in your organization.

If you’d like to continue this discussion, I’ll be providing the opening keynote on this topic at the new CITE Consumization Conference & Expo in San Francisco on March 4-6th, 2012. I invite you to join me to explore this topic in more detail. Disclaimer: This is a paid engagement.

One response to “Consumerization in 2012: Cloud and mobile blurs into other people’s IT”