If you could apply Fitzgerald’s definition of a first-rate intelligence to a thing or group endeavor—always a dubious proposition—Exhibit A might be the New York Times.  This week the Grey Lady published two contrasting pieces that demonstrate the conflicted nature of our economics and the ways we think about globalization.

First up is Thomas Friedman’s opinion piece about Apple and its manufacturing prowess, through Foxconn, in China.  Friedman makes the point in “Average Is Over” that manufacturing has increasingly moved to China over the last decade because China is so attuned to the demands of global manufacturing that it can easily outcompete American companies with its flexibility to changing global circumstances.

Friedman’s example is instructive.  In his piece he references how a factory in China was able to move from a standing start to manufacturing ten thousand units per day of revised versions of the iPhone (with Corning Gorilla Glass replacing plastic for a harder and more scratch resistant surface) in a matter of hours.  Friedman tells the story of how 8,000 workers were roused from their beds in company dormitories, given a biscuit and a cup of tea and sent to work in the middle of the night to accommodate Apple’s revised demand. 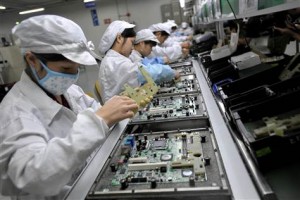 Friedman extols the Chinese for their work ethic and ability to provide the manufacturing flexibility that modern markets demand.  But a second article in the Times “In China, Human Costs Are Built Into an iPad” discusses in fine detail the cost of that flexibility.  In the article we see what it really means to be dragged from bed and fed that heroic biscuit.  It documents 60 hour work weeks, forced overtime and working environments that are, some cases literally lethal.

The article documents how poor ventilation led to fires and explosions in manufacturing facilities and death to some workers.  It documents suicides too as workers jumped from their tall dormitory windows unable to cope with the demands of high production for $22 per day.

I think Friedman confused capitalism for what the Chinese practice aided and abetted by their government and by American business.  Friedman envisions a plantation economy, not modern business.  It is a form of mercantilism, not capitalism.  It exploits workers and other resources in countries where the labor and safety laws are lax and environmental standards practically non-existent.

Take a look at this list of mercantilist characteristics from Wikipedia.  How many do you recognize?

Mercantilism requires two actors, the colony as well as the colonists, thus you have networks of colonies owned by the colonists and restricted domestic consumption in the colonies and this perfectly describes the relationship between Apple and other manufacturers and their Chinese partners.

Ironically while the business interests advocate a neo-mercantilism the U.S. government has had little success at getting the Chinese to open their markets to more capitalism, more foreign goods and to let their currency appreciate to more realistic levels.  This might look like a disagreement between countries but it is actually an argument between American business and the federal government.

This relationship disenfranchises both the workers in one country and the citizen-consumers on the other.  And this doesn’t even touch the issue of lost jobs moved overseas by the mercantilists chasing low labor costs and the ability to ignore health and safety laws.

A form of state sponsored desperation-growth drives Chinese mercantilism and a generation of its people ignore what’s happening in its factories in a vain effort to catapult the country from poverty to emergence and ultimately to first world status.

Friedman holds this up as some kind of aspirational goal for Americans.  He seems to be saying that if only we could be a little more like the Chinese we could recapture our manufacturing base.  But this amounts to prostituting ourselves, our country and its resources to a gratuitous mercantilist ideal.

Why not go in the other direction?  The opposite of mercantilism is not suspension of trade but trade on a more level playing field, one where profits are not made through arbitraging safety and dignity.  Real capitalism.

Companies like Apple have the upper hand.  The conditions in their factories are sanctioned either explicitly or implicitly by them and will only persist as long as Apple applies benign neglect to the situation.  Alone Apple determines what it will pay for components and labor so that it can meet price points in the Fast New World economy.

Other computer and consumer electronics makers use some of the same Chinese manufacturing partners to make their products.  We like those products a lot and we especially like their low prices.  But hidden behind those shiny new things and their low prices are 16 hour work days, no time off, regressive discipline and dangerous working conditions.

I like my consumer electronics but not with the hidden costs that are attached to every device.  Those costs include an eroded and impoverished first world manufacturing base and despotic working conditions where those jobs end up.

In 1906 Upton Sinclair published The Jungle, a book about the lives of American immigrants.  The book spent many of its pages portraying life in the corrupt meatpacking industry.  From that book we derived the sage idea of liking the sausage but of studiously avoiding asking how the sausage was made.

In effect, we’ve been told not to try to hold Fitzgerald’s twin opposing ideas in mind.  But the Times was able to do just that and to offer us a compelling and discomforting contrast.  The larger question is whether or not any of us retain the ability to, as Fitzgerald suggests, function in the face of this information.

4 responses to “IPad, Mercantilism and the Chinese Plantation”