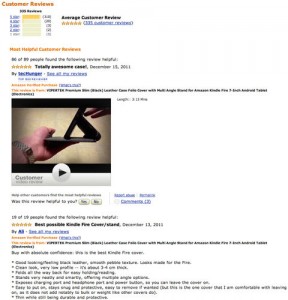 Call it Karma.  A week after we celebrated the ignominious back down forced on the congressional supporters of PIPA and SOPA and their corporate feeders, The New York Times ran a story about how even, or especially, on the Internet, some things have not improved since Roman days.  Caveat emptor, buyer beware.

I call your attention to a story about a little turd of a company, VIP Deals, that sells leather cases for Amazon Kindle devices, oh, and, stun guns.  Don’t ask.  They had been retailing on Amazon but today are probably selling at flea markets out of a ’95 Explorer.

It seems they were buying stars or more precisely the reviews of regular consumers who bought the leather cases and then gave them glowing reviews in the Amazon review section for the product.  The scam came through snail mail.  In the leather cover delivery package was a letter offering a full refund (A ten dollar value…) for the product if the customer would only write a glowing review on the retailer’s site.  News flash: 310 out of 335 reviews had five stars, which catapulted VIP to the top of the heap in the Amazon rankings.

You might say this is a tempest in a teapot but with Amazon projecting sales of 20 million Kindles this year, a few good reviews could set up the “heirs and assigns” of VIP’s owners in Margarita Land more or less permanently.

What’s disappointing is what we the networked did to ourselves on the Internet.  We showed just how easy it is to make a hash out of the ratings systems that depend on everyone to be good scouts.  The problem is pervasive in our society—not limited to a few undesirables who saw a quick way to make ten bucks.  That’s right, a double sawbuck was all it took to purchase the morality of 310 regular Americans.  One of those Americans was quoted in the story thusly:

Anne Marie Logan, a Georgia pharmacist, was suspicious. “I was like, ‘Is this for real?’ ” she said. “But they credited my account. You think it’s unethical?”

Stuffing the ballot box is nothing new but I won’t be so glib as to say it is a time honored tradition that in retrospect gets a nod and a wink from the winners.  For all the good that the Internet has brought and all of its potential, there is also the real possibility that some will use it as just another scam device.

The people who want to limit piracy on the Internet have a point and some form of regulation is going to happen.  Last week was simply an example of an industry laboring in an old paradigm coming face to face with the reality that it needs to change its model.  The Internet needs sane regulation, not the absence of regulation and not censorship.  Without it we’ll be playing whack a mole with little turds like VIP Deals, and who needs that?

2 responses to “Regulating the Internet”