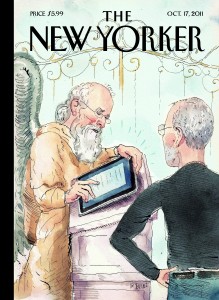 When he died, the cover of the New Yorker had a cartoon of him checking into heaven and St. Peter looking him up on, what else?  An iPad.  So began the mythologization of Steve Jobs.

There was a lot to like about Jobs along with some of the same lifetime baggage that we all accumulate, which was amplified by great wealth.  But for all the wonderful products and his habit of thinking outside the box—and daring us to follow—Jobs was also the creator of a company that built itself on the backs of plantation workers in China.

We can disagree whether this makes him merely mortal or something else but let’s dispense right away with the mollifying assurances that everyone was doing it.  That hasn’t worked since Nuremburg.  Nor can we say that the globalized workplaces in China’s fastest growing cities are by far better than the rural poverty many Chinese peasants escaped in going to the cities.  In poverty these people had a modicum of human dignity, in the cities, not so much.

What Apple and the rest of the global manufacturing community has replicated in China is not a worker’s paradise.  It might be the bottom rung on a global economic ladder and it is certainly a replay of nineteenth century Dickensian Britain right down to the air fouled from burning coal.  Articles in Wired, The New York Times and elsewhere have documented beyond a doubt the harsh working conditions that lead to glitzy and “insanely great” products.

But behind the insanely great is a brutal totalitarian economics—mercantilism—that shakes workers out of their beds in the corporate dormitory to go to work in the middle of the night.  Thought leaders like Thomas Friedman, also of the Times, and other people who ought to know better, marvel at a workforce so, so, so, what?  Dedicated?  Give me a break.

For all the praise and prowess of global manufacturing Chinese style, there is devastation back here at home.  The price of nicely manufactured devices from the plantation in China is structural unemployment.  It is no wonder that the recession drags on with high unemployment.  In the first ten years of Chinese membership in the World Trade Organization (WTO) 42,400 factories—not jobs—decamped the U.S. and reappeared where labor rates of around $22 per day were considered good.  You can trace today’s unemployment rate to the factory-exporting regime of the last decade.

Steve Jobs is not responsible for all this.  Though Apple today is one of the world’s more admired and emulated companies, Jobs was only a part of a global movement of capital to China.  But the results in the factories reflect on Jobs as sure as do the iProducts and the Macs before them.

Forget the jobs that went to China, they aren’t coming back.  Ask for more humane treatment of the workers there.  We also lag at creating jobs for the new economy and that’s a serious problem because others can create those jobs elsewhere.  We can’t be a country where everyone goes to college.  Someone needs to bake the bread and we need to make those jobs rewarding.

There would be nothing wrong with making much greater efforts to redress the inequalities in the global manufacturing system.  Making manufacturing more humane by, say, eliminating the 16-hour day could be a great start as would making workplaces safer and keeping fifteen year olds out of factories altogether. That might serve to help level the playing field and with that we could even rediscover the virtues of Made in America.  While Apple still has the spotlight, we could do it all in Steve’s name as a way to perfect what he left unfinished.