How Are CIOs Looking at Today’s Disruptive Tech Trends?

Last October I was invited as a guest to participate in the Tuck School of Business 10th anniversary session of their Roundtable on Digital Strategies. This diverse group of senior IT leaders is comprised primarily of CIOs of some of the world’s largest enterprises. The roundtable members came together to discuss what was termed the present “mega trends” in technology, including the effect they are having in how their businesses currently operate and evolve. It was an eye-opening experience, not the least because of the transformative changes that were evidently taking place in the companies represented.

One fact stood out: Many of these tech trends are happening with or without waiting for information technology departments to embrace them and bring them into the organization in an orderly and controlled way. I’ve spoken about shadow IT for a few years and it’s clear, particularly with mobility, that loss of control is firmly entrenched in a growing number of large IT organizations.

The mega trends that we discussed that day were the usual suspects. They are the ones that I’ve been exploring in detail recently: Next-gen mobility, cloud computing, social media, consumerization (#CoIT), and big data. In attendance were the CIOs from American Express, Bechtel, Chevron, Eastman Chemical, Eaton Corporation, the Hilti Group, Holcim, Nestle, Sysco, and Time Warner Cable, as well as executives from CompuWare, the Dachis Group (myself), Dell|KACE, and ViON. The Roundtable itself was hosted by the Directors of the Center for Digital Strategies at the Tuck School of Business. The session was moderated by Maryfran Johnson, Editor-in-Chief of CIO Magazine and hosted by Adjunct Professor Hans Brechbuhl, who also wrote his own summary of the day. 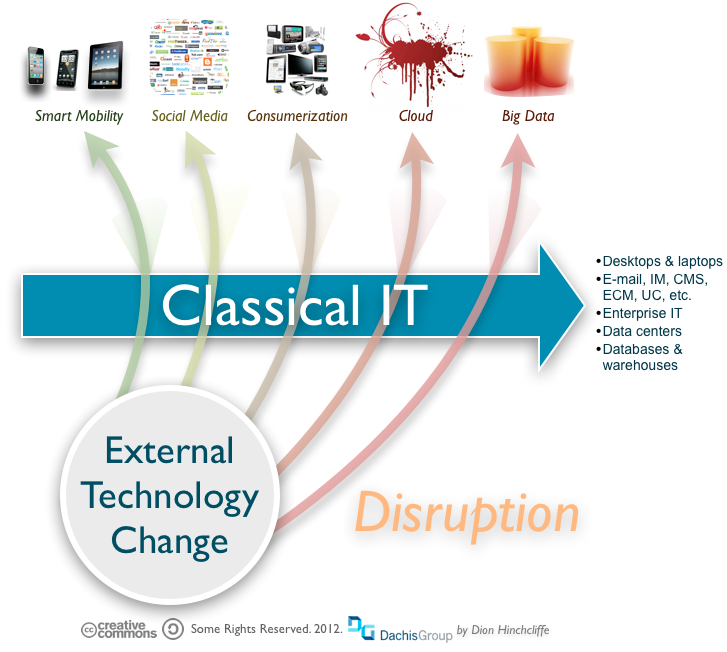 The discussion itself was far ranging and explored all of these megatrends in detail. The resulting outcome, a new 17 page report that has just been issued by the Center for Digital Strategies at the Tuck School of Business, confirmed that companies fall across the spectrum when it comes to adoption of these disruptive technologies. While virtually all the companies represented were feeling the full brunt of smart mobility, others had widely varying experiences with areas such as enterprise social media (aka social business in this context), big data, and cloud, though the first two had the most votes I believe in terms of the trends with the longest term and farthest-reaching impact.

Six key insights about new disruptive tech were derived during the back-and-forth discussions that took place at the roundtable session. These are:

What companies are going to do in order to embrace these trends effectively is going to be the signature generational challenge of our era. I’ve explored the various possibilities (ten strategies to be exact), and no doubt others will discover other routes to success. But the fact that so much of the change is externally imposed on IT departments and the lines of business outside of traditional channels is what makes the transition to them so disruptive. Thus, consumerization may ultimately be the underlying root cause of the rest of the trends as well as the primary driver of enterprise technology for the foreseeable future. 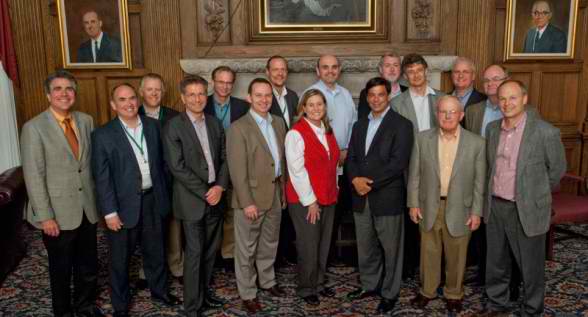 Be sure to read the IT megatrends report itself for full details directly from the original sources. In the meantime, I’ll keep exploring these trends and how companies are planning, coping, and hopefully enabling them for their internal and external customers as IT gears up to have its most exciting decade in a very long time.

Consumerization in 2012: Cloud and mobile blurs into other people’s IT | ZDNet

The “Big Five” IT trends of the next half decade: Mobile, social, cloud, consumerization, and big data | ZDNet

CoIT: How an accidental future is becoming reality | ZDNet