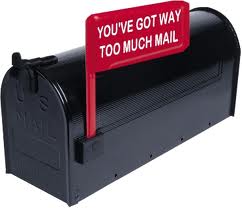 I was recently approached by IBM to me write a white paper discussing the future of email. They came to me, in part because of my work with social business software but also because of this post from last April, where I talked about the current problems with email, the proliferation of social tools and how using the "right" tool for the job it was designed for could go a long way towards getting email under control. The premise is fairly simple, email is out of control and is becoming a less effective communication tool because its use has expanded far outside the limits of its designed use. Frankly I often go on a rant about email, which for me has exploded to the point that I have a serious issue getting to the things I actually need because of the never ending clutter of CYA cc’s, reply all’s, endless conversation chains and lame attempts to do collaborative file sharing and editing. I suspect that many if not most of you are having the same problems. In fact there’s a growing backlash against email, with companies actually trying to eliminate its use entirely through company-wide bans.

Email, which is now over 40 years old, was designed to accomplish a few very simple things, primarily one to one or one to few secure communications. For that task, email is uniquely excellent, particularly because of its wide spread adoption and interoperability capabilities. Through standards anyone can send anyone else a reasonably secure communication, across firewalls from company to company. Email has near universal acceptance, is simple to use (maybe that’s part of the problem though) and, with only a simple address, can connect anyone to anyone else. The problem though, is that we’re using email, which is a communication tool, for all sorts of other collaborative tasks that are outside of its capabilities. That, coupled with the shear volume, is causing the current email fatigue.

So what’s a person to do? Ruling out the somewhat overzealous idea of banning it entirely, are there reasonable solutions to get email under control and get other tools in place to facilitate the tasks that email is not equipped to do, while keeping it in place for the things it does well? The answer, I believe, is forming around the emerging social collaborative tools. These tools, ranging from activity streams to effective collaborative task execution (file sharing), can relieve the burden of using email for other than its sweet spot. But, is just rolling out new tools enough? I don’t think so, in fact I think that we have to see some convergence of tools to really get to the point of overcoming the current obstacles to collaborative work.

The solution, I believe, lies in building a system that federates these new and traditional functions into the most usable UI. There are two paths then, one of pulling everything, including email into a new "activity stream" or moving in the opposite direction, and pulling all of the new social capabilities into the current email environment. Each approach has its advantages and I can see a justification for either. I do think that adoption of social tools would be much higher if the capability to continue in a familiar environment but have the new capabilities available was available and might just be the more effective approach for many. Anyway, you can read the white paper for yourself, it’s available from IBM for free (well, you do have to register), so I won’t recap all of it here.