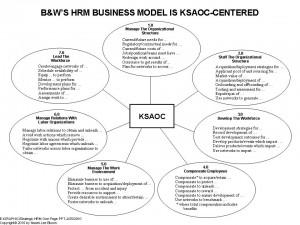 The End Of An Era Is Near

[Disclosure:  This is part memoir and part advertorial, where the advertiser is Bloom & Wallace.]

If you’ve been wondering about the long delay since my last blog post, read on to learn about one project on which I’ve been working.  That project has been to finalize the sunset plan for my very successful, and only real, product – my HRM domain object model/architectural “starter kit.”   For that sunset plan, and even very successful products deserve one, you can skip to the bottom line below, but I found that writing the back story was a wonderful stroll down memory lane which you too may enjoy.  And let me say at the outset that this is one product whose sunset plan has been invoked long before it became a “legacy” or a Snowdon of Yesteryear.  We might wish that all vendors would do the same.

Bloom & Wallace is my solo consulting practice founded in1987.  I began by working, on a time and materials basis, with large, mostly global and diversified corporate clients on their HRM and HRM delivery system’s strategies.  Over the years, my client list expanded to include the HRM software vendors and outsourcing services providers as well as firms (venture capital, private equity, and investment banks) which have an investment interest in this industry.  But for twenty-five years, my mission has not changed: to use information technology as a critical enabler of HRM so as to drive breakthroughs in organizational business outcomes.  From 1987 until now, my emphasis has been on the HRM metrics and strategic HRM capabilities that drive business outcomes (just click to enlarge the diagram, which explores strategic HRM), and I’m honored to have worked with and to continue to work with a who’s who of our industry’s greats — both people and organizations.

To bring leverage to my consulting work, thus making it possible for me to remain a solo, I developed, beginning in 1987, a variety of methodological and training materials, along with “starter kits,” for each task in a strategic HRM and HRM delivery systems planning project.  Some of these materials were published in a tutorial in 1993 by Naomi Lee Bloom’s Learning Products, in partnership with my good friend and valued colleague, Jan Fretwell.  This tutorial was recognized as a product of the year by Human Resource Executive magazine in 1993, and it garnered considerable critical acclaim, but it was NOT a best-seller.  Without revealing who was “sleeping with” whom and the dark secrets of the day’s leading software packages (much of which were revealed in the infamous PeopleSoft/Integral law suit on which I did some software archeology for the defense), my tutorial was a critical success but a commercial failure.  But oh what I learned while scribbling/editting/proofing those many hundreds of pages!

Year after year, I updated these “starter kits” to reflect my HRM delivery system consulting experiences (and those of valued colleagues), the changes in our industry and in technology, the changes in human resource management issues and practices and in the business context within which our organizations operate.  Most importantly, they were updated to reflect my own evolving views on good practices in HRM and in IT.  But I can tell you that the annual update cycles drove first my assistant of many years and, more recently, my husband to distraction as they did the heavy keyboarding.

In 1990 and 1991, I worked closely with then Integral (Dave Duffield’s 3rd enterprise software venture which was challenged to survive, as were all the mainframe HRMS vendors, once PeopleSoft came to market in the late 1980′s and Integral lost its lawsuit) to create the domain models and preferred behaviors upon which their next generation InPower product was based, using my HRM Business Model “Starter Kit” to guide my participation in that design.  The Integral talent on that project was amazing; click here to find some of the folks who reference InPower in their LinkedIn profiles.  The InPower design/development were led by Joel Summers, who went on to become the head of Oracle’s EBS HCM products and then, after Oracle’s hostile acquisition of PeopleSoft, to be head of the PeopleSoft HCM products as well.  I contributed to that product’s foundation many strategic HRM concepts, including total workforce management (to include both employees and non-employee workers), competency-based HRM, total compensation planning and administration, role-based security, team-based organizational design, culturally flexible data structures, processing logic for true global support, and breadth of functionality in work environment management.  InPower was a critical success when it launched, but the then CEO and Board of Integral, the same folks who couldn’t see the promise of client server until it was too late, presided over its demise.  Since then, but not nearly as quickly as I had hoped, ERP/HRMS/talent management software vendors as well as HRM outsourcing providers (many of which have been my clients, been led by former clients and/or been licensees of my “starter kit”) embraced these same ideas for their product direction and designs.  The best of today’s HRM software reflect these ideas in their foundations; it’s not SaaS InFullBloom if it doesn’t.

During 1995 and 1996, at the request of the vendor community, I packaged my intellectual property as a product, called it the HRM Business Model “Starter Kit” (no, I couldn’t have given it a worse name), and released it to an excellent response toward the end of 1996.  Dozens of HRM software vendors and outsourcing providers have since licensed this product (each getting the then current year’s release) as a critical input to the design of their HRM application software packages, their next generation and/or new product designs, and their HRM outsourcing platforms.

Beginning in 2009, largely because of the extensive consolidation in our industry, I began renewing the licenses of some of our earliest licensees, providing them (in many cases, their new landlords) with current versions of the “Starter Kit” along with materials that had not been included in the earliest versions.  With the 2010 and 2011 updates, these materials have become a fully expressed HRM object model “starter kit” along with a detailed set of architectural guidelines (about many of which I’ve written blog posts here) for bringing that object model to life in enterprise application software.

In total, the “Starter Kit” and related training materials are 3,000+ pages of intellectually integrated, structured worksheets and talking points presented in a work book format.  For organizations using a true object-oriented life cycle, ideally agile, the relevant stories and use cases, object classes and class hierarchies, plus myriad attributes and methods are covered along with a great deal of discussion of the whats/whys/wherefores and hows of HRM.  The modeling constructs are obvious, and trained modelers, particularly object modelers, can readily extract what they need and input them into the tools of their choice, assuming that their tools support objects fully, including their incarnation as Web services.  And for those vendors working with models-driven development, which I strongly advocate and directly support, the “starter kit” takes them very far toward application delivery.

Licensees, in addition to training materials that cover the background, context, structure and use of the “Starter Kit,” are also given a very detailed set of application architecture guidelines.  Not just so-called “best practices” in software engineering, these offer very HRM domain-specific guidance in crafting software that is much more highly automated than most.  The goal here isn’t automation for its own sake but rather a careful focus on reducing the total cost of delivering business outcomes for the users of that software.   All too often we’ve focused on the total cost of ownership of software, an important but heavily IT-oriented metric, or even the total cost of service delivery, the emerging standard for running shared services or BPO businesses.  But what really matters to the business is what it takes to deliver provable business outcomes.  That’s the focus of the “Starter Kit’s” training materials, and especially the architectural guidelines.

To my knowledge (but I hope this post will surface anything I’ve missed), there is no analogous product available from any other source, nor have even the major global HRM or HRMS consulting firms created so rich an internal resource.  In 1997, this work was highlighted as an HRM delivery system improvement tactic in a major publication, “The New Frontier,” from the Corporate Leadership Council of The Advisory Board.  With the formation in 1999 of the HR-XML Consortium, www.hr-xml.org, and my role as a consultant to the startup of this industry-wide data exchange standards effort, I contributed (through our consulting work) a number of the basic structures of the “Starter Kit” as a starting point for the cross-process objects upon which so many of their early standards depended.  But in spite of many best efforts, the Consortium was never able to turn its attention to the larger issue of developing/promulgating an industry standard, even in the form of a skeletal domain model.

The End Of An Era Is Near

After twenty five years of massive annual update cycles, licensee training and support, I’ve decided that all good things must come to an end.  I’ll continue to maintain and support my HRM domain object model and architectural “starter kit” through 2012, to include delivering support on new licenses and any of those in process that close in 2012.  After that, I will maintain the records needed to support the copyrights under which the licenses were granted but will not be updating the materials further.  I had hoped that the HR-XML Consortium would be able to step in, with my offer to donate these materials as a starting point, to create an industry standard HRM object model, however skeletal.  But the Consortium has very reasonably decided not to take the donation and proceed in this fashion because they simply don’t have the necessary resources.

So, the sunset of this product is near.  But, rather than being depressed, I’m incredibly satisfied.  Today there is little disagreement about what were considered heretical ideas when I began promulating them in the late 80′s.   It’s really true that PeopleSoft was not based on a fresh modeling of the HRM domain but rather on many then common but deeply flawed notions about HRM data design.  No disrespect intended to the enormous success that PeopleSoft became, nor to its founding/early leaders whom I continue to admire.  But I so wished that they had done more than make the considerable technology leap that was the center of their product sucess.  However, had they modeled the domain as I would have wished, they might well have suffered the same fate that my 1993 tutorial did — achieving great critical acclaim but commercial failure.  Perhaps the HR and IT communities just weren’t ready for that much change.

But they are now!  And the best products of today embrace so much of the modeling and architectural preferences contained in my licensed “starter kit” that I feel entirely comfortable putting those 3,000+ pages into the static archives.  I should add that no one’s happier about this decision to sunset the “starter kit” than is The Wallace.

[You can find more information on the “starter kit” (including some of the licensees) here and here.  And if you’re a vendor that doesn’t yet have a license, you know where to find me.]