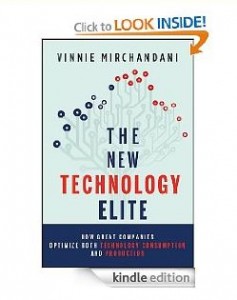 Shame on me for assuming my book would come out on the Kindle after the hardback. That’s so one book ago. Amazon (and B&N) show a March 27 hardcopy ship date, but they released the Kindle version February 28. Makes sense for the electronic version to come out earlier.

So I downloaded a copy and flipped through it. Nice that you can click through on the 500+ citations I have in the book. Nice that you can have it read to you. Nice that it synchs to my Android smartphone and my laptop and conveniently knows where I left off on a previous device.

But, here’s what has not evolved much. Business books ( as different from fiction and academic books) are still sold around Amazon. Several thousand copies of my last book were bought in hardback by case studies and event organizers. That format is still much more convenient to hand out (and for an author to autograph). Amazon got little of that business. This time I have arranged for a book distributor to handle such bulk orders. Amazon needs to make it easier with prepaid cards and frankly, way more support for bulk orders.

Rumor goes its rankings are skewed towards single orders (Amazon is pretty opaque on how its ranking are calculated)  So a book which sells 500 single copies is ranked much higher than one which gets a bulk order for 500 copies.  Its pricing is not that elastic for larger orders etc. Hey, they are doing fine as a business and my book is nice to Amazon as a technology industry elite player. But as a business author, I find their rankings somewhat academic, especially since each local store (amazon.co.uk, amazon.ca) has its own rankings.

The other area where the Kindle has regressed is book pricing. My new book is priced at $ 29.38. That’s just $ 3.30 less than the hardback. Seriously? With no printing or shipping costs?

Honestly, Amazon does not have much say either. When Apple introduced the iPad it agreed to an agency model with the major publishers, and eBook pricing has floated away from a $ 9.99 discipline Amazon had tried to bring to that market.

As an author, should I not be happier with a higher price? With just 15% of the royalties, not really. Honestly, I would rather have a reasonable price and less friction from readers using their calculators to decide whether to buy the book and then zinging me for gouging!

One response to “The Kindle and business books 2 steps forward, 1 backward”