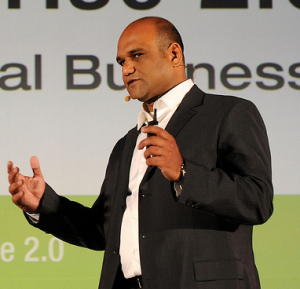 Because its something that I think is meaningful to the industry AND to me personally, it got me thinking.

Sameer has been for the last several years an independent thought leadership beacon. Arguably one of the most important leaders in the space, he has been outspoken, intelligent, a conceptually clear thinker, but always mindful of the fact that we are always dealing with human beings, not just concepts and abstraction. He is widely followed by a very large number of people.

He’s been independent and now he is going to SAP.

So I began thinking, what does it/that mean for thought leaders who do go to the corporate side? Is that bad? Good? Neither?

In his announcement on his blog Pretzel Logic (which incidentally will remain his blog), he said the following (Italics and different colors are mine. Just confirming a strong belief of mine):

Many of you are familiar with my strand of social in the enterprise, as seen on this blog, client work and on stage at industry events. As I wrote last week, the first innings of social in the enterprise is over. Those organizations that are pre-disposed to experimentation have done so. And a good many have seen the light through the work of some amazing practitioners and leaders who have given social and collaborative constructs a shot. Yet at a majority of organizations, executives who generally invest in concepts and technology only when they easily see direct and obvious impact on performance objectives haven’t yet had their “aha” moment. And if they were tempted by the promise around social business, many are still looking for that bridge that practically takes them from a world designed around structured process to one that gets them to blend collaboration at every step of business tasks and processes and in a way that drives revenue and margin, lowers cost and mitigates risk.

My assessment of what it would take to execute this – specifically, aligning core business activity, data, process and exceptions with the right people and insights at the right places, quickly winnowed down the list of organizations that could most logically make this transition a reality for customers. With a pedigree in core business process, business intelligence and industry solutions, and a decisive go forward strategy that now includes real time processing, cloud and mobility, SAP’s product and solution portfolio is one of the few that affords the needed canvas to improve how we engage with customers and partners and how work really gets done internally. The right design will come from the proper infusion of collaborative constructs right where business context emerges for individual users at every customer – a) not just inside or along side but across applications that power complete each business activity, b) when and where real time business intelligence emerges, and finally, 3) at the right (device agnostic) points of consumption. Each of these contextual elements are core to SAP’s portfolio of offerings today – both directly and via its partners.

My work in this market over the years has given me a clear sense of what a product portfolio needs to offer to deliver what I describe above. And as important, the kind of program design follow-through to make sure customers can truly change how they connect employees with each other and to customers and partners. I’ve got a superb team that I’ve already started to get to know over the last few days. I’ll say more about our plans over the weeks and months to come.

Needless to say, this generated some ideas of what the relationship between the company and the newly hired thought leader should consider because it is under no circumstances a “typical” hire and is one that can be hugely beneficial in multiple ways for the company (and the new hire) if done well but a real drain if not.

Sameer, because he is SO prominent in his space – and because he is a friend who I know extremely well – is going to be my example.

So lets start with some IF statements.

IF SAP is smart, they will not only give Sameer the latitude he needs to continue to be the thought leader he is, but they will encourage that.

WHY? Because as we’ve seen in the cases of people like Mitch Lieberman at Sword-Ciboodle, Chris Bucholtz at SugarCRM and in a different vein Anthony Lye at Oracle, when the leeway is there, the value is enormous because the thought leader garners new respect or maintains the respect they had. That respect becomes part of the universe of the company that they work for, in addition to the respect that is maintained independently. The halo effect.  See the above for proof.

IF SAP is smart, they will give Sameer a fair amount of internal leeway to do what he is primarily hired to do

WHY? Because he brings a combination of that thought leadership with strong operational skills and that is pretty rare for a thought leader. He has experience with large project teams on enterprise level products. Personally, I’d suck at his job.  But he can star. He fills an interesting hole for SAP because his skills extend beyond just the conceptual. He can fix the broken and create the new when it comes to product, and honestly, given my experience with Streamwork, it needs fixing and some true creative thinking about it if its going to be competitive in a marketplace already dominated by products like Chatter and Yammer among others.  Sameer is an ideal choice – if SAP lets him be.

What that means generally is that I have to presume when a thought leader is hired by a vendor to do something, that the vendor understands that they can do that something. He/she isn’t being hired as a thought leader per se but as someone who is competent to accomplish specific objectives. The thought leadership (unless they are being hired strictly as an evangelist) is almost secondary to the reason they are being hired. But its easy to let what they have been affect what they need to be by focusing on the evangelical part of the job to the near exclusion of their actual work responsibilities. This shouldn’t happen of course, but it can and I’ve seen it happen.

I think in this case, if SAP gives Sameer the leeway and resources that he needs, they will get a person that exceeds their expectations.  While this seems self evident, we are dealing with a massive corporation. While its one that I respect a great deal, I also have seen the politics, the stodgy thinking and the aspects of the culture (though in general they have a culture better than many) that can throw bottlenecks in the way. When you’re dealing with someone who is both operationally proficient and a highly respected leader in an entire field, the more freedom of action provided, devoid of politics, the better results you get. And that is a blessing.

I think this in general too. Sameer is a great example but its the same wherever. If you hire a thought leader to carry out a particular responsibility AND you let them execute without the commonplace interferences that you see in corporations, then  you’re likely to get better than planned. If you let the same old same old get in the way, well…..