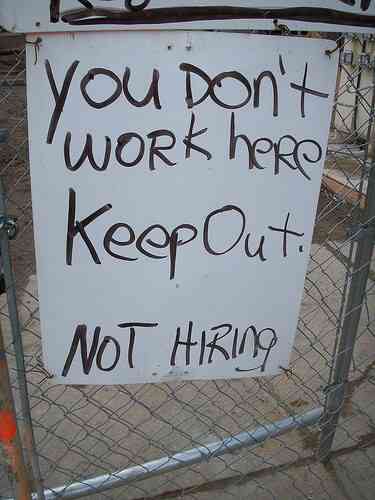 The recession and its aftermath created a business and social change wave that we’re still struggling to understand. One area in particular, work or employment, both the way people are employed and the way companies and individuals get at least some of the required work done is changing. New models of employment, some an extension of shrinking corporate budgets and realities of how an individual can make a living, and other models enabled because of growing connectivity created by the Internet, are popping up everywhere. We know and I’ve discussed here many times, that the Internet is enabling all sorts of business model innovations and some of those new models are directly related to employment.

As more and more people were forced out of traditional jobs and as more companies looked for creative ways to get peak load capacity without hiring more direct employees, contract work has rapidly expanded. Not that independent contracting itself is new, it’s not, but the number of people who are working in that model, and the number of companies that are using it has grown rapidly with no decline in sight. Many individuals forced out of corporate jobs have found that freedom and flexibility as well as the ability to maintain a decent standard of living has made working as an independent more than a desperate fall back plan, but in fact can be a desirable lifestyle change. And in a connected, information based, mobile and cloud enabled business world many types of roles are easily executed in a contract / task / project model. In fact for many it has turned into a win-win, companies get access to great talent when needed but don’t have to bare the ongoing expense and people get compensated for what they know and can do yet maintain independence and flexibility while doing interesting, stimulating work. Don’t get me wrong though, I certainly do realize that many have suffered greatly in a very tough economic environment, but at the same time I know many who have found life changing or at least acceptable new ways to earn a living.

Because of the growing population of available independent workers, many new businesses have grown up to help both individuals find and do contract work, and also help businesses find, manage and pay qualified contract workers. The increasing number of technology based contract positions, particularly coding, fueled the growth of two start ups in the contractor “matchmaking” market, oDesk and Elance, which I’ve written about a few times including this post on the Human Cloud so I won’t spend much time in this post on that part of the new economy.

Technology skills, coding in particular, are in high demand both in direct employment models and in contract models. I’ve read several articles this year on the idea that every new college student (or unemployed recent grad) should learn to code to make themselves more employable. In fact in the realm of developing independent skills, coding is solid gold it seems. One start up that leverages this trend is Codeacademy, an online coding learning environment that is sponsoring Code Year 2012 for people to learn coding skills this year…and so far 415,953 people seem to have taken that challenge to heart.

Among the new employment models that are related to the increasing availability of independents is a trend that some have labeled micro-employment. This is a very interesting new area that is enabled by the Internet and leverages peer to peer connectivity as a part of the model. The idea is that companies and individuals can outsource tasks using an online matchmaking service. These tasks could be anything and in some models the work is based on projects that can be broken down to very granular micro-tasks. The process is facilitated by an online marketplace environment where employers (individual and companies) can post tasks and potential candidates can bid on the work. Posting is free as is job searching, the fee is based on the transaction and is paid by the employer when a match is made and executed. The best know of these services is Amazon Mechanical Turk, but the competition is heating up in this market with two newer competitors Zaarly and TaskRabbit. While each company has some unique components they all leverage the Internet and rely on a community paradigm to establish and maintain credibility of both parties. Leveraging the social network effect for establishing and maintaining trust is a key component to the success of this model. The type of tasks are very diverse ranging from highly skilled to unpleasant (at least in my opinion) manual tasks and the pay rates are just as diverse. These three sites alone represent hundreds of thousands of employment opportunities.

From the human cloud to micro-employment for many at least, the nature of employment is changing, and the opportunity for getting work done is facilitated in new ways because of the Internet and the social web. The new economy is still being defined but these new employment models are an important part of it.