The Enterprise IT Landscape in 2012: Consumerization Rules The Roost

It’s nearly official at this point: 2012 is the year consumerization upset the enterprise. That’s certainly not to say that there won’t be any non-consumer innovation in the enterprise this year, but it is limited in comparison and much smaller than the now almost total revolution that mobile, social, cloud, and other external trends are wreaking on how we work and live.

The implication of all this is as fascinating as it is difficult to untangle the trends and discern the short-term ramifications and long-term implications. For business and technology leaders, it’s imperative to try to keep up. Our job is to navigate our organizations through the blizzard of changes taking place in the technology landscape that are also simultaneously intertwined with a new set of behavior and cultural transformations in the world at large. Arab Spring? Corporate Spring? These are just sign posts on a much longer road that’s thoroughly influenced by technology, yet far from solely about it. In fact, it’s just as much about us and what we do with the innovations happening all around us. 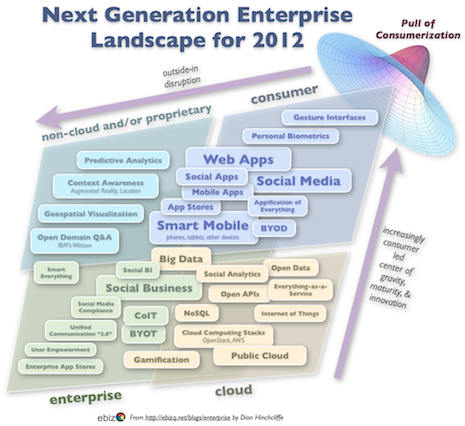 As I’ve charted the consumerization story over the last couple of years, I’ve been trying to assess the impact it has on how we guide, model, design, and govern our organizations given that technology is increasingly the very fabric within which we do business. For decades throughout the 20th century we added technology to what we did, transformed it some, but largely paved the cowpath. Those days are increasingly coming to an end. The profound pervasiveness and variety of technology today, the incredibly deep integration that now makes virtually everyone in the developed world connected together all the time, has remade the possibilities.

This is the story of what is increasingly called CoIT, which is the fusion of this rapidly emerging new world with an overhaul of the practice of information technology. Our current method of deploying and managing IT — via a typically all-too incremental and oft hide-bound bureaucratic process with which most organizations today still try to apply technology to their business — takes place at a pace and scope that is now clearly inadequate to the task. While I’ve covered in detail the issues, challenges, and profound opportunity that consumerization of IT entails, what’s missing is an up-to-date picture of the technology landscape.

I last created such a picture of emerging enterprise tech in detail here on this blog in 2009. The difference between the enterprise landscape in 2012 and that view is stark, even dramatic: Today’s major IT mega-trends of mobile, social, big data, and cloud based on largely consumer models now rule the roost.

Related: Updating digital strategy for the social and mobile era.

So let’s get down to business and look at what’s on plate of most IT departments, and increasingly their users, who increasingly can’t and won’t wait for the technology to come through the traditional process, which is becoming choked by the volume, variety, and channels, including Web apps, mobile apps, app stores, SaaS, cloud infrastructure, and much more.

One quick note before we look at this year’s tech landscape: I frequently use the term “next-generation enterprise” and I’m often asked what I mean by it. In this context, it describes organizations that are proactively moving into the present by changing how they assimilate, architect, apply, and maintain their technology solutions in the context of updating and transforming their processes, structure, and business models to effectively align with and work natively in today’s networked and highly digital economy. While that may be a mouthful, it also accurately describes what most organizations must do to ultimately avoid disruption in the marketplace as technology increasingly defines how our businesses engage with and provide value to the world.

The list below, also depicted in the visualization above, is broken down into four sections, three of which extensively overlap with the enterprise (non-cloud and/or proprietary tech, consumer tech, and cloud tech) and largely consist of trends from the consumer space (though not exclusively). When they are closely related, the trends overlap in the visual above.

Astonishingly, as long as this list is, it can’t possibly be exhaustive and many of these topics are entire fields by themselves. However, I believe it’s a strong short list of near-certain strategic candidates for companies to reference as they look at becoming next-generation enterprises.

Please add your additions to this list in comments below and I’ll issue an update if there are any particularly interesting submissions.

One response to “The Enterprise IT Landscape in 2012: Consumerization Rules The Roost”