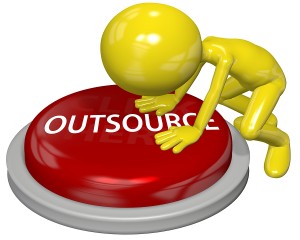 Phil Fersht and his team wrote a pretty stern column recently : “Let’s cut to the chase here – “outsourcing”, for most buyers, is like purchasing a wedding dress – a one-time transaction followed by seven years of relationship struggles and future legal wrangles.”

I have been married 22 years and it’s so easy to find failed marriages. My wife and I instead look for the ones that have worked.

Same thing with outsourcing. Even though my new book is not about outsourcing, let me highlight 5 inspirational sections which do relate to successes in outsourcing world.

Apple/Foxconn “Apple has stayed loyal to Foxconn through multiple releases of iPods,iPhones, and iPads in spite of sweatshop accusations, employee suicides, and explosions in its Chinese facilities. Most companies like to diversify between company-owned and outsourced plants, and certainly across geographies. Apple has been willing to take the risk of putting its eggs in the Foxconn basket and taking plenty of jabs from China bashers (although Foxconn has recently been looking at a significant diversification to Brazil)…Over 200 million iOS devices sold to date, most assembled by Foxconn, justify the loyalty”

Boeing/HCL “There were several advantages of having HCL across the board working with all its partners for the 787 development for Boeing. First off, it minimized compatibility issues that come from integration of multiple subsystems. It also made sure that HCL cross-leveraged the knowledge and learning on the 787 program across suppliers to speed up the development process.”

Facebook/Prineville Data center “It has spent two years developing everything that goes inside its data centers—from the servers to the battery cabinets to back up the servers—to be as green and cheap as possible. For example, Facebook uses fewer batteries thanks to its designs, and to illustrate how integrated the whole computer operation is, the house fans and the fans on the servers are coupled together. Motion-sensitive LED lighting is also used inside. The result is a data center with a power usage
effectiveness ratio of 1.07. That compares to an EPA-defined industry
best practice of 1.5..”

Flextronics/Workday “Flextronics would drive the development road map for Workday.In turn, Flextronics would draw upon the years of HR experience the Workday team had to shape and standardize its processes. It was a model software development partnership. The proposal from Workday saved us more than 40 percent over the life of the (global HR) project, with even larger savings in the first year. By going with Workday we were able to reduce our team size by more than 60 percent.”

Cognizant/Internal Staff  “Sukumar,(the CIO) on the other hand, is obsessed with what he calls “social design,” and his quest to deliver 500 percent productivity on Cognizant projects. “Think of avalanches. A snowball starts small, but then gathers mass and gradually turns into a massive avalanche. That is the basic inspiration behind Social Design. What we do individually should (positively) impact hundreds and thousands of others””

Let me also lay out likely objections to these examples

The Boeing 787 was delayed by years. But the use of HCL to test across its supply chain is a big innovation. Also, HCL’s fees involve another innovation – a portion is contingent on the 787’s success.

Facebook is not a data center outsourcer. True, but if it can build a world class data center, should not outsourcers?

Workday is not a systems integrator. Maybe that’s why they only proposed a fraction of staff and effort of the competing SI.

Why do internal efficiencies at Cognizant matter? 500% productivity improvement is impressive no matter where.