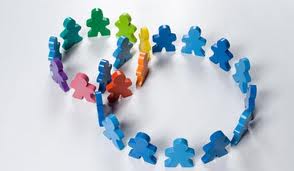 Last week Yammer and Ultimate Software announced a partnership that combines the Yammer enterprise social network with Ultimate’s UltiPro HCM. Combining the deep employee profile from the corporate HCM system with a real time social collaboration tool is an important step in building out a complete enterprise social network, connecting employees to each other and to partners and customers. A modern HCM system contains critical workforce intelligence that starts with recruitment and includes job history, compensation and payroll, performance, skills / talent and career development data…all the relevant employee transaction data (system of transaction). The system of relationship, or social network, has connection data, interaction data, important clues to interests, skills and competencies, as well as organic performance data. The integration and interaction of the two systems forms the core of the complete corporate network.

Specifically in this case the two companies are starting by releasing the first phase of the integration this Spring and continuing to iterate and increase functionality with subsequent releases. In 2012 the roadmap includes:

The overall concept, tying together the collaboration and communication activities with the performance management system and the employee data seems like a natural extension of both systems as companies become more open, collaborative and more people-centric in the way that work gets done. The systems of relationship have to be integral to the systems of transaction and systems of decision as the enterprise matures.

Today we’re seeing social collaboration tools, and the subsequent networks that are created by the tools coming from several different directions. Some systems of transaction are building networking into the fabric of each system, a trend that will no doubt accelerate as companies learn that collaboration happens at the point of work, not off in a different system. Collaborative work is about getting the right people, data, content and systems together at the right time, in the work context. The systems have to facilitate that to be relevant. What’s happening is that different networks are growing up around different types of systems and tasks. At some point these different networks have to be tied together into one broader system of networks. The systems of relationship can form the link between the networks, both internal and external. In the new networked business model that is evolving there really are a series of interconnected networks that interact in different ways depending on the work context. This Ultimate – Yammer partnership is a great example of the movement towards this new network of networks.

This is starting to happen around several vendor systems. Yammer’s partnership last year with Netsuite is another example of the evolution and connection between transactions and relationships. Salesforce.com has similar partnerships that use Chatter as the connecting network, including Workday, FinancialForce and Infor as well as all of the other Force ISV’s, who get access to Chatter through the platform. Oracle is doing something similar with its new Oracle Social Network (OSN) product and the network at work in the Fusion HCM modules. OSN could be the system of relationship across all of Oracle’s product portfolio. Another example is IBM’s partnership with SugarCRM, which ties IBM Connections (the system of relationship) to the CRM / SCRM suite.

To me this move toward integration is the next step in the maturity of social enterprise solutions. While functionality to facilitate relationships are critical, they really only start to provide their true value when they are tied directly to the systems of transaction and systems of decision. This blending is the start of the move to the next generation of enterprise platforms, which are inherently social and support real time decision processes in the work context.