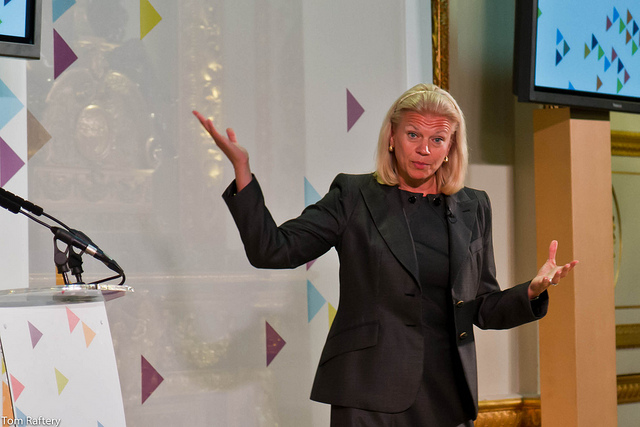 Some of their milestones down through the years include:

Consequently, I was stunned to read at the weekend that IBM’s CEO was snubbed by the organisers of the US Open at Augusta simply because she is a woman, and despite this IBM continued to sponsor the event!

A bit of background – the Augusta National Golf Club is a private club, so it can set its own rules. Its rules have been notoriously discriminatory through the years – it didn’t admit black members until 1990, until recently it had a policy requiring all caddies to be black, and it continues to refuse women membership.

The fact that it refuses to allow female membership is now sharply in focus because the club has traditionally invited the CEO’s of the main sponsors of the US Masters to become members. By the end of this year’s tournament, despite IBM’s significant sponsorship, Ms Rometty had not been invited to become a member, because of her gender.

Now Ms Rometty is reportedly not a frequent golfer, so while it may not be a devastating blow to her game, it is a slap in the face that she wasn’t asked to be a member when her predecessors at IBM were. As were the CEO’s of the two other Masters sponsors (AT&T and Exxon Mobil).

IBM’s involvement with the event goes back many years and they are tied into it deeply not just financially but also at a technological level. According to Bloomberg

IBM is featured in the tournament’s TV commercials and runs its website, mobile-phone applications and media-center technology. Palmisano serves on Augusta’s technology tournament committee. He remains IBM’s chairman — a role Rometty is likely also to assume upon his retirement

Augusta may need IBM more than IBM needs the Masters…

2 responses to “Can IBM continue to support blatant sexual discrimination?”