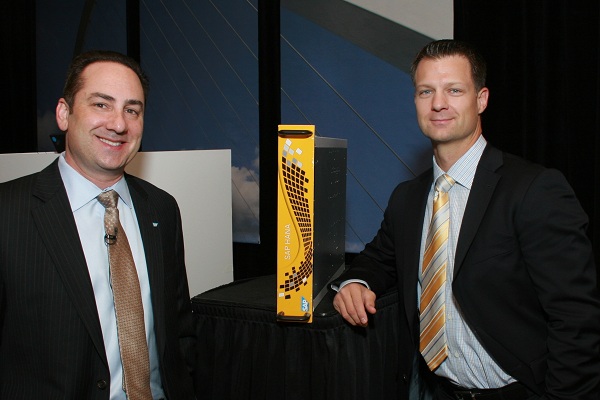 SAP has been trying hard to demonstrate the business case for its in-memory, RDBMS-killer – HANA – and one of the key issues has been proving both HANA’s scalability and its appropriateness for serving as an analytical platform for large SAP transactional systems. The case for both of these proof points seems to have been significantly advanced by the results from some recent internal benchmarks on HANA that SAP shared with me this week.

While the results are unverified, and therefore need to be seen in light of the on-going marketing war between Oracle and SAP, the data at a minimum put the onus on Oracle to match or better, if it can, what look on the face of things to be relatively impressive numbers.

Here’s a summary of the data from SAP’s latest HANA scalability test: 100 billion records of relational data, representing five years worth of SAP sales and distribution data was loaded into HANA, which compressed the original 100 terabytes of disk data down to 3.8 terabytes of RAM. The HANA system was running on what is a commercially available IBM X5 16-node cluster, which is four times as large as the platform used for SAP’s previous HANA scalability test. According to SAP, the cost of such a system would be around $600,000.

What is impressive is that SAP is claiming that not only does this configuration deliver sub-second response time –300-500 milliseconds for a set of standard SAP BW-like queries – but that this is basically the identical query response time SAP got when it ran HANA on the smaller 4-node X5 cluster. Equally impressive is that these response times were achieved with no database tuning – the data were partitioned at load time, but nothing in the way of typical RDBMS tuning tricks were used to achieve these results.  Similarly impressive was that the scalability test included ad hoc (as opposed to BW-like) analyses that compared customer data across different time periods with equally impressive results. Being able to do this without using material views is another potential feather in HANA’s cap.

The benefits don’t just accrue to analysts looking to leverage data in the SAP Business Warehouse or a generic data warehouse. SAP is also counting on a tool called Landscape Transformation, which replicates data from the SAP transactional system to HANA, to allow customers to analyze real time transactional data alongside their Business Warehouse data using HANA.

The results of these scalability tests, once they have been independently verified, will have two important effects. The first is that it takes the issue of the scalability of HANA off the table and drops it squarely in the competition’s court. And the second is that these results make the business case for HANA center around relative functionality andprice/performance, making it a potential winner for both the business user and the IT department.

I’ve placed the caveats around these data for an important reason: SAP needs to have these results independently reviewed, and, once reviewed, Oracle and any other competitor that feels  threatened by HANA should be given the opportunity to respond with scalability data of its own. If SAP’s data holds out under independent scrutiny, it will have the effect of shifting the competitive conversation in SAP’s favor. And that in turn will be further proof of the waning importance of relational technology as a cost-effective and functionally superior solution for modern analytical purposes.