The Value of Social Business: Exploring the ROI Question

It’s a pretty simple equation at the end of the day. When businesses decide to invest in technology, they are hoping to ultimately get more value back than they put in. The time windows for such investment are generally 2 years, more or less. This was recently validated for me as I helped judge the entries for the 2012 CIO 100 Awards. I was surprised that many companies expect 100% ROI in rather short periods of time, often in just sixth month for efforts that may have taken years to implement. Whether this is generally unrealistic or actually achievable is besides the point.

The fact is there’s virtually no question that technology has dramatically increased productivity in developed economies around the world over the last 10 years. I often lead my talks these days with the chart of worker productivity in the last decade, which has had a tremendous run-up. Technology is a profound force multiplier, an amplifier if you will, for human effort and that’s why it’s such an important industry. Consequently, the value that a decently organized IT effort can throw off, even today when diminishing returns should be in sight, can be very significant.

These days the talk in enterprise circles is about the next generation of IT, specifically what it is, why it’s valuable, and how to get there. This new wave of IT is generally accepted to revolve around smart mobile, cloud computing, big data, consumerization, and most germane this to discussion: social. Social media, or social business when we talk about applying it in the enterprise to get our work done, has definitively arrived on the global business stage. The latest numbers from Emarketer say that nearly 1.5 billion people will be engaged in social media this year. Other data shows that there has been a mass migration from other forms of digital communication. Thus, it’s no longer optional for enterprises to engage with their workers, customers, and partners in social media. Unfortunately, some companies still haven’t received the memo about this global change and will end up losing contact with a substantial portion of their market. Others are much more interested and willing to invest, but only in a well-organized effort that can zero in on the business value. 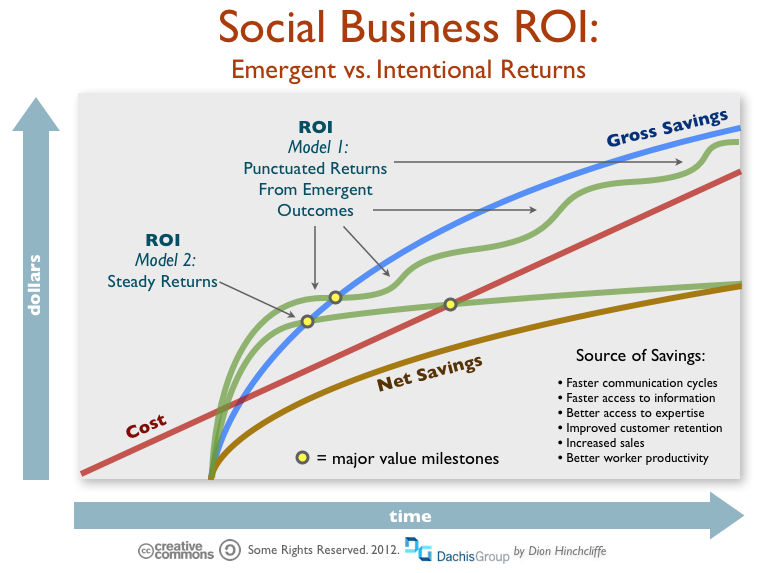 And this is the rub: The techniques and approaches of social business are just a few years old. They can be applied in a large number of ways, only some of which will solve major business problems or meet strategic needs. ROI is as ROI does, to paraphrase a well known saying. Often, feedback loops are all we have to see if we’re scratching the right itch. We measure what we’re doing, see if it’s moving the needle, adjust and optimize based on what we’ve learned. Rinse and repeat. This feedback loop has become central to finding our way.

Deb Lavoy perhaps set it best in a seminal piece yesterday on CMSWire:

We have a lot to learn about social business — though we in the biz are crazy saturated with it day in and day out, it’s really only 3, maybe 4 years old. We have yet to determine what it can do, what makes it work, how to be successful, and when to expect what kind of results (though we have lots of excellent theories).

The right metrics, properly applied, can help us learn. Are we progressing? Why or why not? Are we defining progress correctly? Does action A work better than action B? When properly considered, metrics help us chart and adjust course toward meaningful goals.

Metrics represent an hypothesis — one that can be right or wrong — giving us the chance to prove it one way or another. Metrics are guideposts — your weight can be an indicator of health, but it is not in and of itself health. In fact, cancer patients are known to be quite thin. Goldman Sachs, Enron or BP — all were doing well by many measures of corporate performance and each met with disaster that “no one” predicted.

By definition this process, which goes to the heart of much IT adoption and optimization, means that we only have a rough idea of what we’re really doing and we need full contact with reality — namely actual business processes — to see if we’re on the right track. Unfortunately, our internal stakeholders are usually uncomfortable being the subjects of such experimentation. They want the “correct” solutions and they want them now. In short, they want to know: Will social business help improve customer engagement? Can it increase customer satisfaction? Will it make workers more collaborative and efficient? Can it dramatically improve product development, recruiting, or sales processes? The ROI question, particularly around enterprise social media, is always asked by those unfamiliar with the solution being proposed.

While the answer is almost certainly yes, we’re still in the ungainly teen years when it comes to social business maturity. Our answers, for a particular business or even a given industry, are sometimes less than certain because of the general immaturity of the industry. These days, I’m much more confident, based on the growing body of evidence from many quarters, that social business is a real force multiplier in its own right, and it’s one that’s generally more potent than previous forms of communication, collaboration, and engagement, often by double digit margins. But we’re often only 60% of the way sure of how to apply it in a given business situation. The rest has to come from post-deployment optimization as well as emergent outcomes. These two factors alone mean that 6 month ROI windows are less likely to occur, even though the payoff will ultimately be very substantial.

In fact, as I’ve written before, social is a new type of technology, one that’s much more freeform, unstructured, and yes, unpredictable than the advances that came before it. This means much more innovation, variety, and volume will come from it. It also means it must be managed very differently. By this I mean the ROI of a social business effort regarded and managed through the traditional IT project delivery process will look very different than a deployment and management effort matched to the technology. One that is fundamentally agile, highly iterative, and actively encourages and supports emergent outcomes. These days, I’m not theorizing, we now see this as key lesson learned and explore this in some detail with case examples in our new book, Social Business By Design (see the MEC case study.)

In the meantime, to get to ROI with social business the most direct way, I recommend these steps:

That’s a good start and hopefully enough to avoid the major causes of low ROI for most efforts. But in today’s amazingly packed enterprise IT landscape, practitioners will need every edge they can get to stay ahead of the technology change curve.

3 responses to “The Value of Social Business: Exploring the ROI Question”