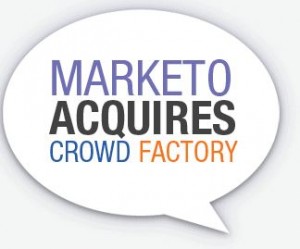 As predicted here last November, Marketo today announced it has acquired social campaign management platform Crowd Factory. After interviewing Marketo CEO Phil Fernandez about the company’s funding round last year, I headlined my post Marketo looks to buy into social, and here are the opening and closing sentences:

It’s an uncannily clairvoyant piece of writing*, but the trouble with being so prematurely prescient is that there’s nothing left to write when the event actually happens. All the analysis about why Marketo bought Crowd Factory today is already there in my November blog post:

“Fernandez’ comments imply that Marketo is thinking about engaging in and acting on conversations that might take place with customers after the initial sale. Such a move makes sense given the age-old mantra that your best prospects are often found among, or through referrals by, your current and past customers. It’s also in line with the emerging trend, supported by online technologies, towards ongoing, subscription-based relationships rather than the traditional pattern of disconnected, one-off sales events — see my take on subscription billing vendor Zuora in my blog last week, Enterprise software pivots to new stacks. Another factor in Marketo’s thinking may be a strategy to help it expand out of its core B2B customer base to embrace more consumer-focused brand owners, where maintaining the brand relationship forms a big part of the marketing spend. Certainly, this is where some of the most successful of the emerging new breed of social influence vendors have been building their businesses.”

(* Of course it’s not uncanny or clairvoyant at all, it’s just a case of listening carefully to a CEO as he outlines his strategy, doing some sensible research and writing it up accurately. But it’s not the first time I’ve had this feeling that I already wrote my analysis months before a current news item. There was Oracle’s acquisition of Taleo in February, for example, which I’d already shot my analytical bolt on back in October, when I wrote: ”I’d expect the [Oracle] shopping list to include Taleo and several others …”)

The trouble is, everyone’s attention span on the Web is so evanescent these days that it’s just no good predicting stuff three or four months in advance. No one ever remembers. Services like Twitter, with their short-lived retention policy, institutionalize the cult of now. Personally, I hate not being able to search the tweet archive. I’ve always thought of and written for the Web as if it were a permanent archive. For a long time you could still find all of my earliest online writings with a single Google search. No more, it seems, as the old ASPnews.com site has finally been wiped, I’ve just discovered. Fortunately I kept all the original texts so maybe electronic oblivion can be my friend after all and I can just repost all my old stuff, lightly updated to bring it current. I’m sure no one will ever notice …