Mobile, Social And Integration With The Papyrus Platform

Day 1 of the ISIS Papyrus open house was more about their capture, document processing and correspondence generation, which is what many of their customers are using. Today, the focus is more on newer functionality, and we’re starting with Roberto Anzola, senior manager of R&D, discussing their mobile and social capabilities. 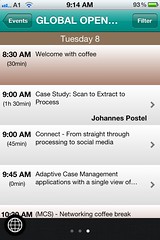 They provide a mobile app that acts as a portal to any application developed on their platform; Forrester has recently identified this functionality as “mobile backend as a service”, where the application is defined on the server, not on the device, and accesses data and user interface components from the server. This provides access to the same application on iOS, Android, PC desktop and in the browser through their UI widgets. The mobile server supports SOAP and REST calls, as well as OAuth for authentication on social networks. The app provided for the conference (which you can find on the iTunes app store by searching for ISIS Papyrus), is built on their mobile server technology. We saw a demo of an iPad-based vehicle claim app built on this platform, and how the menus and features on the app are driven by the case definition in the desktop environment. Because it’s driven by the Papyrus platform, the app has access to the same data and documents as a desktop application, although rendered in a mobile form factor.

He went through a number of different integration points that they have with other systems:

Although the title of the session was about social media, this went through a much broader set of integration capabilities, as well as the mobile platform.