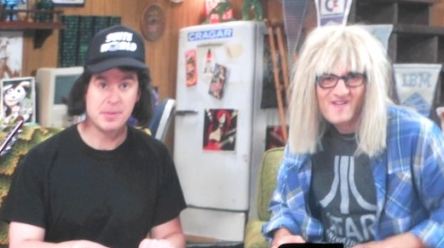 NetSuite is no stranger to aggressive marketing,  and SAP has clearly been their #1 target for a while starting from pranks like the SAP for the Rest of Us Party during SAPPHIRE 2006 to staging a shootout at the anti-SAP Conference or releasing edgy videos a’la Mac vs Windows and even launching a Business ByNetsuite program – an obvious play on SAP’s Business ByDesign offering, which at some point I called the best SaaS Business Suite customers can’t get their hands on (more on this soon).

Well, today is no exception, at the opening keynote of SuiteWorld, NetSuite’s 3,500-person conference CEO Zach Nelson announced their biggest ever win, a three-letter giant .. drumroll.. no, not IBM, but SAP themselves.  Yes, the audience was shocked to learn that SAP renewed a $1M license with NetSuite.  The shock turned into laughter when they found out it was via their recent acquisition, SuccessFactors.

Ironically former SuccesFactors CEO and SAP’s freshly minted Cloud-SaaS-On-Demand-You-Name-It Czar Lars Dalgaard was on stage at the very same moment at another conference, SAP’s 5 times bigger SAPPHIRENOW, explaining the Enterprise Software giants Cloud Strategy.   And oh, boy, is there a lot to explain…    ByD, the SaaS product that was supposed to change the world has seen a succession of technical, marketing, business fiascos, and is still largely MIA.

In the meantime SAP has promoted their other SMB offering, even “cloudifying”  Business One, and when it now looks like they finally got Cloud Religion, the core of their Cloud Strategy will clearly be SuccessFactors – both the existing platform and Customer base.   All this brought into question the very existence of Business ByDesign (SAP Execs reluctantly admit they had come c lose to killing it), which still faces uncertainty.  All I can say is, it’s a pity when the fate of good software lies in internal corporate politics…

But back to NetSuite: is SAP a true customer?  I very much doubt it, although technically I am sure they are.  It could have been routine purchasing action (extension of existing contract), there may have been implementation / change management considerations ( you don’t disrupt business by chucking the system that runs your operations), it is clear that NetSuite has been their past and only short-lived present, until they can cut over to SAP ByD.   Or they may already have, responding to questions @LarsLuv announced they moved finances from NetSuite to ByD in a matter of weeks.   That is almost immaterial – although kudos to Zach Nelson who played it up nicely:-)

What really matters is the fate of ByD and whether  / how it will stand up against NetSuite on a very important market segment: subsidiaries of major corporations, i.e. of SAP’s traditional customer base.   The Two-tier ERP Strategy has been gaining popularity, and until now the key beneficiary has been NetSuite,  taking bites out of SAP’s pie.   Now we’re hearing (if the tweet-stream is any indication) the same term coming into fashion in SAP-parlance.   Will SAP Business ByDesign finally make it?   Or will SAP continue ceding market opportunities to NetSuite?

Update:  According to Phil Wainwright’s sources,  ”SuccessFactors is no longer using its NetSuite instance“.  Phil and I agree that’s not what really matters though.