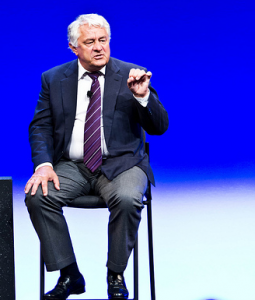 I have been in Orlando for the Sapphire event and while I missed day 1 I did take in the full experience yesterday. With no particular narrative here is a summary of thoughts I collected.

Sapphire is huge, the main pavilion is easily 3-4x the size of Dreamforce and the energy is studious and focused. Walking the show floor revealed a lot of SAP people in every area demo’ing and talking about SAP products and technologies, and as @pgreenbe noted there wasn’t a lot of chaos and noise. It’s actually very pleasant to be on the show floor.

The morning keynote featured co-CEO Jim Hagermann Snabe and Lars Dalgaard, formerly the CEO of Successfactors, which was acquired by SAP about 3-4 months ago. Snabe is engaging and confident, I can see how he compliments Bill McDermott nicely, being able to go deep on any product or technology topic while also engaging customers at a business level.

There was a nice retrospective of SAP’s 40 years, paralleled to that of the technology industry in general. It became a little bit much when Snabe attempted to insert SAP into the narrative by joining unrelated technology advances, like NASA’s technology program and how SAP used hardware in the early days. The history is important but trying to use the trajectory of history to predict the future is a strategy fraught with peril and SAP should be mindful of the fact that history reveals a continuing series of disruptive developments that upend incumbents with increasing speed and violence.

Snabe laid out the major tech themes for SAP, which I will sum up as Data (Hana), Mobile, and Cloud. There were others but they roll up into these larger themes and for the most part represent long running investments that SAP has been making. Overall, it was logical and confidence inspiring to hear him walk through this.

Ron Dennis from McLaren Group came on stage for a fantastic one-on-one talk with Snabe and I really enjoyed the video that opened this as well as the conversation. McLaren connects the physical world with the digital world in a very interesting way, combining technology innovations and high performance computing to deliver the cutting edge that sets the direction for entire industries. McLaren is an SAP customer (the relationship is a lot deeper) and something Dennis said resonated with me, which is that for the scale of McLaren the investment in SAP was hard to justify.

This is the pivotal issue for SAP, the scaling of price-to-value for businesses of all sizes. The fact that McLaren called this out while on stage with Snabe should cause pause for everyone in SAP who is plotting the future of how applications are packaged and priced.

The focus on cloud computing has been impressive and Snabe made a good point when he commented that in the not too distant future people won’t talk about the cloud vs. on premise because it will be all cloud. And all mobile. The challenging part of this is squaring it with Snabe’s emphasis on “consolidating the core” because customers don’t want disruption; it’s hard to imagine anyone successfully delivering leapfrog innovations while insisting on an incremental path for customers.

Migration paths are a reality for SAP, as would be the case for any company with a large customer base, and it’s not just about on-premise to cloud but also a major factor in moving from relational databases to integrated OLTP+OLAP in memory systems and user experiences that meet users in a desktop and on a mobile device. Everything that SAP delivers must have a migration strategy attached to it, which means they will take longer to deliver products and the cost to develop will be higher.

Lars Dalgaard came to SAP through the Successfactors acquisition and in a very short period of time he has established himself as a disrupter as well as consolidator of power. Lars is solely responsible for overseeing some of the most critical deliverables in SAP’s application strategy, primarily in cloud apps Business By Design and Business One. In fact I was shocked to see Business One getting as much attention as it is getting this week (Business One is the result of an acquisition in 2002 of a company called TopManage).

Dalgaard presented an organizational model of applications around Customers, People, Money, and Suppliers. This is a great way to approach applications, far more appealing than the old acronym heavy approach of ERP, CRM, FICO, HCRM, PLM, etc. While enthusiastic about this approach I was disappointed that Lars spent about half of the talk on People and gave just brief mentions to the rest.

SAP has been self-conscious about user experience from my earliest days with the company, and in all fairness it is appropriate to highlight that SAP applications are often complex because the problem sets they are delivering on are complex… try to do production planning or order-to-cash without having some complexity. Having said that, SAP has failed to deliver compelling user experiences for people who are casual users of their systems (e.g. submitting expense reports) and I think SAP deliberately conflates the notion of UI and UX with less than optimal results. A new HTML5 UI will not by itself deliver a better user experience… full stop.

For Lars to say that it’s about time SAP delivers great UX was an insult to all the people who have been laboring to deliver better user experiences since the late 1990s. This is not trivial stuff and SAP deserves credit for investing in this area consistently over a long period of time and Lars on stage demoing his dream app, which is little more Flipboard, doesn’t reflect the considerable experience in how business applications work in the real world (e.g. would you really just discover you don’t have enough people in Europe and then move people from the U.S. over to fill the gap?). It’s also worth pointing out that Successfactors didn’t have a great UX either… 15.6m users and only 29m reviews doesn’t suggest a high degree of interaction.

The segmentation of solution sets according to customer size is logical but also illustrative of a problem that SAP continues to struggle with, which is how to serve millions of businesses instead of 10s of thousands. Business by Design is enterprise and large mid-market focused, Business One is SMB; this is an extension of how SAP has gone to market but the challenge is how do you serve millions of businesses versus 10s of thousands with this model? It’s not just SAP, all business software providers are challenged by packaging/pricing within the context of a business model.

I was very surprised to hear little about social technologies, especially when covering CRM topics, or in the new parlance of Customers. Surprised but not disappointed because I think a lot of vendors are reflexively reaching for social because it is necessary for the news cycle not because they have a clear strategy for delivering customer value. I have seen SAP CRM apps that have social capabilities so I know this is not out focus for them. I suspect the omission of social as a theme reflects a prevailing view that this is just expected to be part of your offering so why focus on it at the risk of diluting the primary messages you are delivering.

The Hana technology is a legitimate game changer technology and while I doubt Oracle is overly concerned they probably should be. What SAP has developed, over a long period, is substantial and the innovations that will be possible as a result of a single image column store database will lead to leapfrog benefits for customers and technology vendors alike. It’s important to recognize that SAP is not an interloper in the database world, the core development teams at SAP are steeped in database expertise and in terms of core database engineering SAP has had a foot in this world for many years, from the MaxDB open source database to the acquisition of Sybase. SAP knows databases.

Hana has clear performance benefits but it is not yet a utility grade service and has capacity limitations (albeit 100TB is pretty frickin big) but the capacity issue is probably less constraining because column store databases are much more efficient (you pack much more stuff into the same sized box) and over time the upper limit will increase. Evolving Hana the extent that it goes to market like Amazon DynamoDB is not clear to me, nor when the question was asked was the answer clear…

Lastly, SAP continues with a high degree of self-consciousness about appealing to startups, but to their credit they are reaching out to developers with free licenses and talking about a pricing model that is not solely based on data volumes (small companies can generate a lot of data). Time will tell but it’s always reassuring when SAP doesn’t just focus on the largest companies in the world as the core customer segment they are targeting.

Full Disclosure: SAP paid for my travel and hotel while in Orlando, I covered all my other expenses.