This week I’m in Sydney to speak at several social business events and begin what will turn into a global book tour forSocial Business By Design, the new enterprise social media management book I recently co-authored with Peter Kim. Australia is a unique market for social business and I’ve learned a lot in preparing for this visit. One major learning that’s been reinforced for me here is that we often speak ofshifting a company’s culture as a primary success factor in social business adoption. However, it’s become clear to me on this international trip as well as others over the last few years that regional culture has a large role to play as well.

A case in point is the country’s high level of social media usage in its citizen’s personal lives. However, in stark contrast, Australia has one of the lowest adoption rates of social media for business purposes (aka social business) in the developed world. 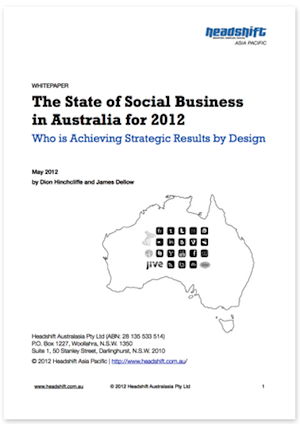 Only Japan ranks lower. Asking around, it turns out that Australian companies tend to be much more highly regulated and conservative than their counterparts around the world. Sometimes that’s a great strength, as Australia has been little impacted by the financial shenanigans recently taking place in other parts of the world and have come through the downturn it a decent state. At other times, such as adopting important new technologies or approaches to business, this can become a liability.

However that doesn’t mean social business isn’t in fact also getting a foothold here, like it is in so many parts of the world at the moment. To get ready for my presentations, I conducted research on the latest social business success stories, much like I’ve been exploring here on ZDNet lately, and came away with what I think is a fairly impressive list of recent examples. Some of these were strong enough to warrant a better formal description and I ended up rolling my research into a brand new white paper that we released yesterday in partnership with my trip sponsor, Headshift Asia Pacific. (Disclaimer: They covered my travel expenses this week.) Titled The State of Social Business in Australia for 2012, it covers various industries in Australia that are engaging successfully in social business including travel, law, government, consumer electronics, retail, and food and beverage. Only recent examples in the last 18 months were included and primarily ones that have had significant returns. Based on my research, I believe it’s the most up-to-date snapshot of social business in the country available at the moment. 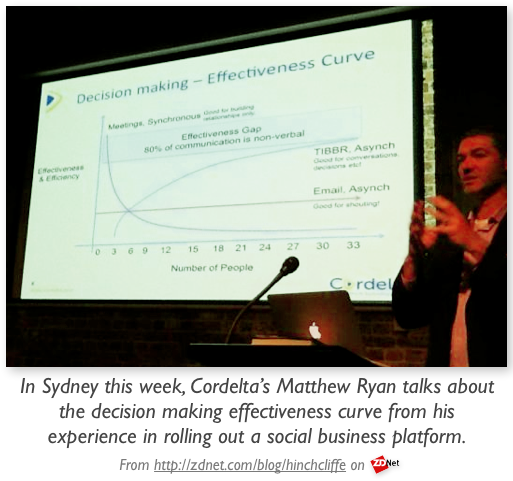 One of the best quotes of the trip so far has come from Cordelta’s CIO Matthew Ryan, who explored his roll-out of Tibbr in his medium-sized professional services company at an event earlier this week. Specifically, he told the story of how he observed that e-mail became exponentially worse as his company steadily grew. To address this growing issue, they then began searching for a way to communicate and collaborate better. Noting that e-mail was an increasingly aging form of digital communication, Matthew observed for example that there is no way to unsubscribe to a Reply All e-mail, the proliferation of which was one of a major issue that was plaguing the company and consuming valuable worker time and attention. To solve this and modernize their operations, they eventually settled on a social business platform based on Tibbr. He also noted (and which is my favorite quote) is that social collaboration does not require “perfect knowledge of who should participate” beforehand. Any and all of those who wish to be involved can be, and if you aren’t interested, the conversation quickly recedes in your activity stream, never to bother you again. It’s a simple example but shows how social communication is inherently more efficient that older digital models. There’s just much less gardening of social networks required such as the tedious filing, deleting, or just reading all the e-mail that continually comes in. 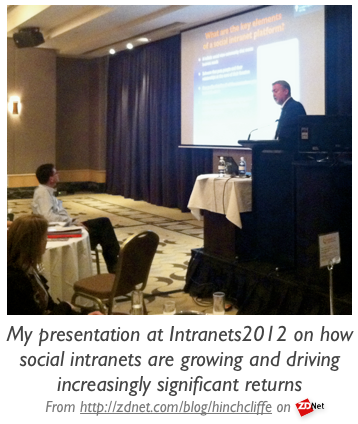 The next day I went to theIntranets2012 conference to give a talk on social intranets and how large organizations are beginning to roll them out in scale. You can find the full deck for this talk on Slideshare as of today. Although social intranets is a trend just beginning in Australia, the audience seemed quite interested and realized that it was time to move beyond the portal model as the organizing principle. When I said that enterprises were extensively deportalizing in the United States and moving to new models (including social networks), there was quite a bit of head-nodding.

I’ll be providing some additional workshops and press interviews here in Sydney the next few days while I’m here and then heading off directly to Berlin for another social business event and more local discussions. If you’re going to be in the city there Monday through Wednesday and would like to meet, let me know, otherwise you can catch the details here on this blog next week. More from the road soon!