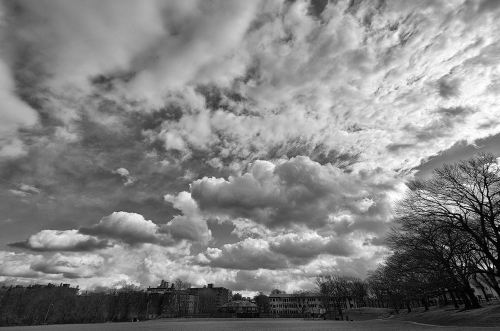 I was particularly interested in SAP’s plans around the cloud, which involve consolidating on-demand and cloud products under Lars Dalgaard, who joined the SAP’s Executive Board following the company’s $3.4 billion acquisition of SuccessFactors, where he was CEO. The acquisition enabled SAP to bring in an external cloud executive willing and able to disrupt the status quo, an important step in the company’s long evolution to embrace cloud computing.

A historical perspective. For years, SAP has had an identity crisis over its relationship to cloud computing, which makes sense given the differences between business models and corporate culture associated with cloud and on-premise software. To appreciate fully the significance of this internal disruption, it is necessary to review a bit of SAP’s history with the cloud.

In a sense, the roots of SAP’s cloud efforts began prior to 2004, with Project Vienna, a service-oriented architecture re-platforming initiative intended to unify SAP’s underlying data model. Project Vienna consisted of approximately 700 software engineers. By 2006, SAP presented SOA by Design, which analyst Josh Greenbaum speculated would be “potentially available in SaaS mode.”

By 2006, when SAP formally released Business ByDesign, the company had spent substantial sums but still could not deliver software as a service economically. In a meeting around that time with several members of the Enterprise Irregulars, including me, then-CEO Henning Kagermann said the company had considered spinning off the ByDesign group into a separate company, although that idea was eventually rejected. By 2010, SAP had finally turned ByDesign into a fully multi-tenant product capable of supporting the economics of software as a service.

In summary, it took SAP almost ten years and highly significant investments to make an irrevocable commitment to the cloud. By acquiring SucessFactors and installing Dalgaard as cloud boss, SAP has made an irreversible commitment to the cloud as a core competency going forward. Despite this commitment, we must remember that cloud today accounts for less than ten percent of the SAP’s overall revenue. Therefore, today’s cloud strategy is a foundation that will only achieve fruition in years to come.

For a company with deeply established on-premise revenue streams and a correspondingly strong on-premise sales culture, the shift to SaaS and cloud has been slow and painful. For this reason, one should congratulate Co-CEOs Bill McDermott and Jim Snabe for pushing cloud deep into SAP. For the last several years, they have worked closely with CTO and Executive Board member, Vishal Sikka, to re-build SAP’s innovation culture. The new cloud initiatives are a continuation of those efforts to reinvigorate SAP’s culture.

Understanding transition issues. Congratulations aside, SAP’s cloud success is far from assured. SAP is a massive company with sales and consulting organizations that expect the big hit financial benefits associated with selling on-premise software. Substantially completing this cultural transition will take years, especially since most of SAP’s current revenues come from on-premise products and services.

Lars himself will face obstacles as he seeks to challenge and disrupt SAP’s consensus-driven culture. However, as I said on Twitter:

Lars is brash, people will fight him. But, brings right kind of aggressiveness to push SAP hard. That’s good.

Responding to the confusion around Business ByDesign, Lars wrote a blog post specifically on this topic, saying:

Although SAP will clean up short-term transition confusions quickly, deeper tensions between the on-premise and cloud parts of SAP’s business will remain for the next 3-4 years.

CIO recommendations. SAP customers should consider their own cloud strategies independent of SAP’s current product readiness, bearing in mind that SAP’s cloud portfolio will expand over time to include more offerings for companies of all sizes.

Even if you are a dedicated SAP shop, it is still worth being aware of buying options such as Workday, NetSuite, or salesforce.com. These companies helped establish the competitive environment that pushed SAP to make the dramatic cloud moves we now see.

When deciding which existing systems to move into the cloud, distinguish between core applications (such as finance) and those on the periphery (such as CRM). Build your cloud transformation strategy by analyzing which applications can move to the cloud with least disruption and greatest benefit.