A few weeks ago the IT analyst firm Forrester made what is probably the first major declaration that tablets will soon become the primary computing device for most users, even going so far as to say that they will ‘rule’ personal computing in the near future. While I think the numbers speak for themselves on this, I also believe that many organizations are either unready or unwilling to hear this yet.

Part of the reason for this avoidance is because of the substantial overhaul it will require IT departments to undergo, and major change is invariably painful and difficult. This retooling includes the full gamut of IT responsibilities: Infrastructure, architecture, processes, tools, skills, and governance, right when so many companies are also dealing with many other generational IT disruptions.

Another reason for unpreparedness is that the tablet revolution has largely become a bring-your-own-device (BYOD) phenomenon. This has started to displace IT as the primary middle-man when it comes to much of technology delivery inside of our organizations. The current wave of nearly rampant IT consumerization is in the center of this discussion: Users are starting to call the shots, and when they aren’t, the tablet vendors are with app stores and other delivery channels that neatly sidestep yesterday’s technology intermediaries, particularly the traditional IT department. 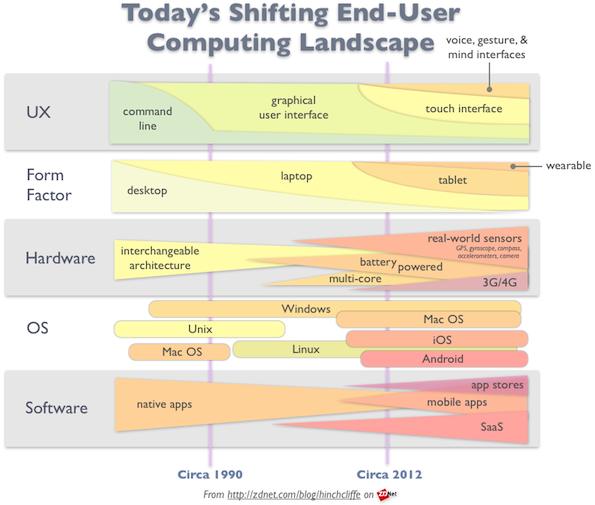 Finally, the tablet industry itself has moved faster recently than just about any technology bureaucracy ever could, setting records for end user adoption along the way. In just two years, the industry has gone from basically non-existent to 19% of everyone in North America having a tablet of one kind or other, according to the Pew Research Center. This has left most IT departments either in a profoundly reactive mode or attempting to be proactive but not moving rapidly enough.

Not helping matters is that the tablet industry is also highly fluid at the moment. Its overall direction — especially for how it will meet the needs of enterprise customers — is uncertain, other than simple facts like Apple is dominating and Android is #2. Beyond that, the details of the story keep changing, making it hard, or at least fairly risky, to place expensive bets on strategies for the future of service delivery in the enterprise.

Reformulating IT delivery in an uncertain tablet world

While difficult and potentially risky, waiting for the dust to settle and for clear trends to emerge in the mobile industry just isn’t an option. Employees are using their tablets for work now. They’re using the apps they prefer and they also want access to company networks, intranet services, and enterprise data. And this strong demand is not just coming from line workers, but from the most senior executives as well, whose requests are far more difficult to ignore or put off. Organizations must have a strategy that will co-evolve rapidly with the tablet industry, providing ways to maximize the business value that tablets offer while managing the downsides, the largest of which — at least today — are generally perceived as security, data control, regulation, and compliance.

While employees are busy downloading Dropbox, Evernote, and an array of MS Office editors en masse today, IT departments are first and foremost worried about the uncontrolled exposure to the cloud that these mobile apps often cause. This is because many of the most useful apps aggressively use the cloud and beam user data (and therefore company data) into their own data centers or those of their partners. It’s essentially a nightmare situation for data security and virtually all organizations today are facing it.

Related: Tablets in the enterprise: Pros and cons

Given that tablet operating systems and management tools don’t have the right level of declarative policy control over which apps that workers can use based on where say, they store their data (other than the highly ineffective route of white or blacklisting offending apps), and it’s a recipe for the perfect tightrope walk: IT can’t stop users from using tablets, but enabling them automatically triggers the scenarios that the Chief Security Officer is most worried about.

In reality, the decision points for how much and what to open up and tablet-enable is even more complex, along with the challenges of delivering IT on devices that were largely never designed for enterprise requirements. These are at least the following:

Enabling tablets isn’t enough: IT must be rethought

The real lesson is this: To get the primary advantages of tablets will require more than paving the old cowpath (i.e. merely conducting a literal translation of legacy IT to tablets.) Tablets are fundamentally different computing devices with entirely new capabilities. To get the real competitive advantage of the next-generation of end-user computing will require rethinking how tablets and their innate capabilities and strengths can be used to transform business processes. Location-awareness, always-connectedness, augmented reality, pervasive video/audio, and more can create highly situational and context-aware apps that hold the potential to provide hard business benefits. These benefits include boosting worker productivity, improving decision making, saving time, enabling more self-service, and reinventing business processes to operate in deeply integrated, highly immersive, and seamless new ways.

At the end of the day, as with the rapidly emerging field of social business, organizations that are able think as true mobile natives, and are successful in enabling the new business models and ways of operating which next-generation mobility makes possible, will reap the fullest rewards as they update and refine their end-user computing leadership.