Last week, Constellation Research founder Ray Wang was quoted making an important — and rather provocative — statement about the default stance of external social business. It’s one that goes to the very heart of how we should best organize our businesses to engage with the social world. Specifically he said:

It’s … dumb to keep driving traffic into Facebook. You should drive traffic to your sites and your communities by pulling from Facebook into what you’re doing. That way you have control of the data and make sure that you’re not just selling stuff back to Facebook, which you’re going to buy again.

While most companies are not in fact dumb, just digitally inexperienced, there’s a vast wealth of strategy inherent in these few simple words. First and foremost, the challenge that many companies have with moving to social is that they regard it much like they did digital when they first encountered it: As a tool to use in the same way as existing non-digital methods. So mass mailing became mass e-mailing, brochures became company Web sites, and ads on billboards, magazines, and TV became online ads, and so on ad infinitum. Most companies are at the same place with social today.

Much has been made over the years about the two way medium of the Web and how it inherently transforms the relationships companies have with their customers. That’s because it creates sustained contact and engagement with the marketplace that can be used in many valuable ways. From the first inklings in the Cluetrain Manifesto over a decade ago to the now global revolution of the social Web today, large companies have generally received this signal very poorly, and when they do, it’s been the proverbial paving of the cowpath, meaning they move to the new channels and then just continue to do what they did before, the old way. 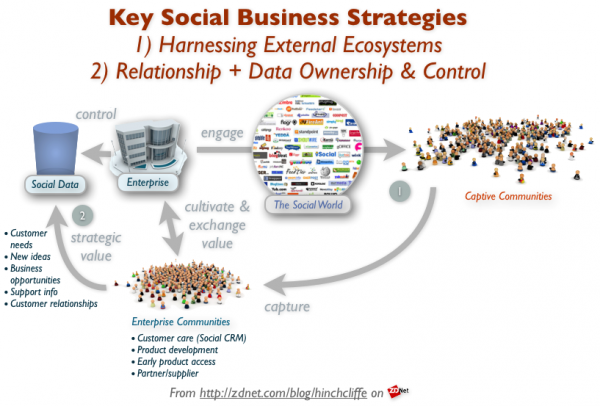 So if companies must now be social in order to reach their customers and the marketplace, shouldn’t they be on Facebook, the world’s largest social ecosystem? Ray doesn’t necessarily believe so, and neither do I, at least not primarily. Though the best case for engaging externally on social networks is probably on Facebook, most companies must go well beyond this to get to strategic value. The issue — and the key to getting something valuable done — is defining exactly when companies should engage with Facebook (or other social networks), and how. To answer this requires understanding the ground rules of network-oriented business.

Understanding the strategic social landscape
Even though the Internet industry lived through revolution in detail, most companies haven’t yet absorbed the principles of Web 2.0, which laid out the strategic playbook for how to assert and establish ownership of your corner of the network (or really, all corners.) One of the core principles was — and is more relevant than ever today — that control of data is what ultimately separates the winners and losers. Specifically, the concept says that the winners on a network will be the ones that can successfully create and maintain control over strategic sets of data over the long haul.

Thus, your strategy should be connecting meaningfully to all relevant constituents of your business (workers, suppliers, and customers), engaging in long-term digital and social value exchange over the network, capturing all the data that this activity creates, and mine it strategically for value, perhaps even letting others have limited access to it, for a price. Creating strategic data sets is relatively easy in the social world today, since most activity within it is visible. This can be captured, measured, and analyzed, allowing just about any trend about anything to be discerned and tracked. Having this data be yours — and not having to share it with the platform you’re using — is a key to competitive advantage.

So, let’s get back to being on Facebook. Giving them a front row seat, and even outright ownership of your customer’s data (at least when it comes to interacting with you), is almost certainly a setup for trouble long-term. Creating Facebook pages or social experiences for your customers on any external social network means giving up control of the relationships you create in them, along with all the data they represent to companies that you have little control over. As Ray pointed out, you’ll just end up paying them for the privilege of accessing your own data, and worse, they’ll be able to monetize it however they like, eliminating much of the competitive advantage you could have by doing that yourself (and being the only one that could, with your data.)

But not every company can afford to create their own community or mine it for data. And this is exactly whey social networks like Facebook and Twitter can be so important: They are vast social ecosystems which can be intelligently and cost-effectively harnessed for their audiences that can then be diverted to a company’s own communities for useful purposes. In other words, used smartly, they can do most of the work for us, but by taking a few simple precautions, companies can keep most of the benefit.

How to own your social destiny
In fact, the strategies for using social networks in a way that retains control and maximizes value for businesses are fairly straightforward, you just have to know the rules. More importantly, much of what most companies do in terms of their operations will be done this way in the near future. It’s far better not to move your core operations to external social networks. The strategies to ensure success here are:

Leverage Jakob’s Law. Coined by Jakob Niesen, it’s one of the most important rules of social business that exists currently: You must design your products and services to reflect the fact that people spend most of their time on other people’s sites. Take advantage of this by creating digital bulwarks (presence) on all social networks relevant to your business. In other words, at first, go to where the customer is today.
Create your own strategic communities. While you might in fact want to leave your Twitter followers and Facebook fans on Facebook, the smart move is to divert them to your own communities whenever possible. You can use the power and size of external communities to fuel the growth of your own. When possible, make social activity focused on specific business objectives (mutual support, product design, beta testing, pre-sales, etc.)
Design graceful on-ramps that connect external social networks to your own communities. Anything truly useful should be done in your ecosystem, so make it easy to move from your social network presence to your own communities by making it clear where to best engage with you to get things done.
Instrument your communities and then listen, analyze, and engage. Have a backstop that captures all the activity in your communities, store it, and use it strategically. Building capability in social business intelligence is key here, as is opening up the data to others to make use of in creative and powerful ways.
In short, it’s unwise for businesses to use Facebook naively when organizations can easily create their communities of their own and control the data. However, Facebook makes it so easy to engage with customers that most businesses start there and never leave. It’s easy for companies to check-in, but they generally won’t check-out, however organizations prepared to organize strategically can achieve much better outcomes.

To succeed externally with social business, companies must become competent at harnessing social ecosystems wherever they find them, making them onramps to their own communities, and asserting control over the relationships and data that comes from them. They can then make wise use of them to drive their business objectives, avoid disruption, and provide the best protection for their customers.