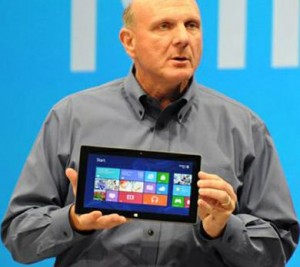 As he introduced the Microsoft Surface tablet yesterday, Steve Ballmer kicked off by pointing out Microsoft has long been a hardware player. He is right of course. Lots of accessories – mice, webcams. Lots of devices which did not overlap much with its licensees – Zune, XBox, Kinect, Surface table.

With Surface Tablet we may be seeing a pivot around the Wintel model which has worked well for decades. At least on surface (pardon the pun).

Under the surface, in the last decade the cracks have been growing.

Microsoft has watched HP (and by extension Compaq) go through waves of turmoil there and whispers that it drools after the PC-less IBM business model.

It has watched Dell get “out-Delled”. An excerpt from my book:

Dell used to be held as a benchmark of efficiency with its “build-to-order” supply chain. It manufactured mostly what was ordered and even paid for in advance.Apple raised the bar by showcasing a new product, guesstimating likely demand, and tuning its supply chain day by day and hour by hour. It broke traditional rules of demand forecasting—because there was little historical data to forecast from for a version 1.0 iPod or iPhone or iPad. It balanced the risk of overproducing or increasing buffer inventory and taking write-offs versus under producing and losing customers to
the next competitive product just a few weeks away. It took that risk, time and again, and made the rest of the industry do the same.

In turn, Microsoft partners have themselves been frustrated. One particular emotive word: Vista. HP and others have long had tablets only to watch lukewarm support from the MS Office and other groups.

Nonetheless, it will be interesting to see how Microsoft balances the OEM investment in Ultrabooks and Win 8 machines with its own path.

Even more interesting will be to see how vertically integrated Microsoft decides to become. Apple has extended that definition considerably with its wildly successful retail model, with its tight control over its huge apps ecosystem, with its ability to control component supplies and outsourced manufacturing with extremely large and long-term commitments.

Microsoft is no rookie. The XBox and Kinect in particular have given it plenty of hardware experience. Heck, the entire Foxconn XBox team has threatened suicide. Even Apple has not had such a tricky manufacturing challenge!

2 responses to “Microsoft: A new era of vertical integration?”