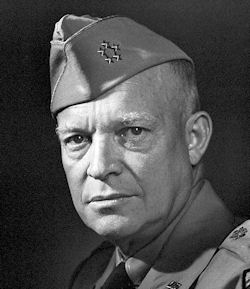 “Our landings in the Cherbourg-Havre area have failed to gain a satisfactory foothold and I have withdrawn the troops. My decision to attack at this time and place was based upon the best information available. The troops, the air and the Navy did all that Bravery and devotion to duty could do. If any blame or fault attaches to the attempt it is mine alone.”

This 4 sentence letter was written in pencil on a 4 1/2 x 7″ piece of paper by General Eisenhower on June 5, 1944, the eve of D-Day. It is extraordinary in many respects, from the fact that it was written by hand on a plain piece of paper, not stationary emblazoned with “Supreme Commander of Allied Expeditionary Force”, to the lesson of leadership it contains.

He would have been justified in writing that his forces had failed because the German fortifications were more resilient than expected, that the beaches more heavily defended, that the paratroopers missed their landings, that Rommel reinforced with a Panzer division, that casualties on the beaches prevented a full invasion force from proceeding, that General Montgomery was a prickly schemer and sowed discontent among his leadership, and much more that went wrong in an operation the scale that Overlord was.

Eisenhower did not have a second letter that said, in effect, that he had succeeded and the credit was his alone… credit for success belonged to the Allied Force, blame for failure was Eisenhower’s alone. This is the burden of leadership that anyone who is responsible and accountable for delivering a stated objective understands, the team wins or I fail… and regardless of the circumstances I failed because I was unable to lead in a satisfactory manner.

The reason I write this is that culturally we have conditioned ourselves to operate in a collective mode and reflexively go to “we” when we really should be reinforcing “I’. In companies this forms a cancer that eats away at teams when things don’t go well… failure is spread around because accountability has not been reinforced. As a leader it is incumbent upon you to lead and that doesn’t mean move with the group but rather ahead of the group knowing full well that if failure is the outcome that you alone are accountable for it.