Enterprise Social: Beyond The Newsfeed 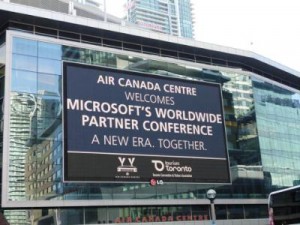 In a continuation (of sorts) to the previous session on SharePoint here at Microsoft WPC, Jared Spataro discussed more about where Microsoft – specifically SharePoint – is headed with enterprise social. He did repeat some of the information from the last session, since it’s not all the same audience, specifically the discussion around key industry trends (social, consumerization, devices/mobile, cloud, and cross-organization support). The title of the talk is (I think) based on the idea that Microsoft’s previous vision of social was including newsfeeds directly in the Outlook/Exchange client: more of a customized consumption rather than truly social.

Obviously, SharePoint gave them a good start on the connected platform, and is something that is more of an IT platform decision, whereas the connected experiences is what they’re hoping to bring in with Yammer with a focus on the business end users choosing to do this. Yammer will capture the organic social need in the same way that the old free version of WSS is used by the business to create their own connections and content. It’s sort of funny that Microsoft brought in SharePoint around 2000 as a free add-on to their server licences with the idea that it provided end-user computing capabilities without IT intervention, then by the time they reached SharePoint 2007, it had migrated to something that was an IT tool rather than a business tool when it came to design and deployment. Then, they spent $1B on Yammer to start the cycle again…

My interpretation (an a fairly common opinion since the Yammer acquisition was announced) is that they built a bunch of social capabilities in SharePoint because they needed it to compete, but realized that it wasn’t quite good enough so bought Yammer to retrofit in. If that’s true, then it would be risky to spend too much time building on the non-Yammer social networking capabilities in Office/SharePoint 15 when they are likely to be replaced over the next two years or so.

He allowed quite a bit of Q&A time in this session as well, and there were some interesting ones, such as how the Skype acquisition fits into the social collaboration spectrum together with Yammer, and the boundary between personal/consumer and enterprise social collaboration. We heard about some of the cultural shifts required for this, which is something that I talk about in my presentations on social BPM; Microsoft punts this squarely into the arms of the partners to carry forward with their customers.

An interesting couple of sessions, and I’ll drop by the reception to meet up with a few people and visit some of the partner booths. Tomorrow, I’ll be back for at least part of the day to see the keynote and check out a bit more about social CRM as well as Azure; the technical content is a bit lightweight, but it’s interesting to see the market positioning.

One response to “Enterprise Social: Beyond The Newsfeed”