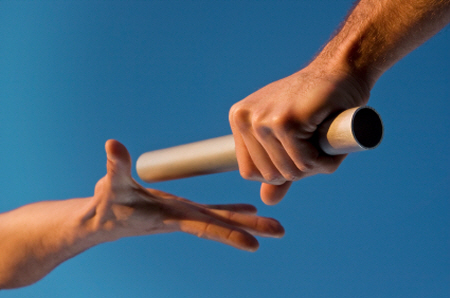 According to the Associated Press:

the Olympic Broadcasting Services service was jammed by “hundreds of thousands” of people sending texts, pictures and updates to social networks such as Twitter and Facebook.

Commentators on Saturday’s men’s cycling road race were unable to tell viewers how far the leaders were ahead of the chasing pack because data could not get through from the GPS satellite navigation system travelling with the cyclists.

To alleviate the bandwidth issue, which prevented broadcasters from tracking the exact location of cyclists, the IOC asked users not to tweet, saying unless it’s an “urgent, urgent one, please kind of take it easy.”

The problem arose due to lack of data bandwidth provided by telecom carriers, which did not properly anticipate demand. In a sense, the bandwidth allocation issue is not surprising given the scale of social media during these Olympics. CNET’s Zack Whittaker reports that users send almost ten million tweets during the opening ceremonies alone.

Since this blog is about IT failures, we must ask whether this situation qualifies as such a failure. The answer is a definite “yes.” Although the cause was human error in planning for sufficient bandwidth, the net effect is a technical glitch that prevents media broadcasters from doing their job as planned.

Many IT failures appear as technical problems even though the underlying cause has no basis in technology. In this instance, planners under-estimated demand for data and did not allocate sufficient bandwidth. In addition, it appears the telecom provider did not prioritize broadcast-related traffic over public access use. As a result, congested data pipes pushed out the GPS signals, creating this particular IT failure.

Update 7/30/12: Just to be clear, the social media network traffic disrupted transmission of the GPS signals to broadcasters. The cyclists themselves were not impaired.