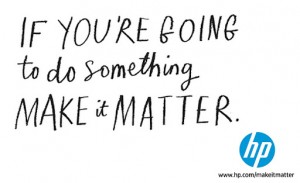 It’s a sad day when the bar is set so low that a company’s most successful endeavor in recent memory involves a new slogan and ad campaign tied to the Olympics, and the best news to date is that it won a lawsuit it should never have had to engage in. Such is the state of Hewlett-Packard today, a once mighty force in technology that’s now relegated to a status that can best be described as dire.

News from the last quarter only compounds how dire things have become: a $1.5 billion charge against earnings due to a greater number of employees taking an early retirement package than had been anticipated.  As if HP could afford to lose talent. To paraphrase the old aphorism: Those whom the gods wish to destroy, they first deplete of their valuable employees.

The brain drain on top of the increasing irrelevance of HP in many key markets and its inability thus far to credibly enter any new markets makes the question that remains not whether CEO Meg Whitman can keep HP alive, but how she will dismantle HP into something that is both manageable and relevant in today’s market.

If even that option remains.

It’s been almost a year since that fatal day in August 2011 when then-CEO Léo Apotheker, following the misdirection of a board that was asleep at the switch in so many well-documented ways, announced the possible spinoff of HP’s PC unit, the death of Palm, and the acquisition of Autonomy. The ensuing firestorm undeservedly cost Apotheker, his head of communications, HP’s long-time CTO, and numerous others their jobs and their reputations.  It was as shocking a misfire as I have ever seen in almost 30 years of covering the IT industry.

Into the breach rode Meg Whitman, promising stability and leadership and armed, one would assume, with an ironclad agreement that she would get more than the paltry 11 months Apotheker was given to clean up a mess that was decades in the making.

With the close of Whitman’s first year rapidly approaching, I think it’s safe to say that not much has changed for HP.  The company’s revenues and market share continue to decline as core markets like PCs and services fall apart. The Autonomy acquisition, which couldn’t have been undone even if Whitman had wanted to, has proven to be as troubled as most of the company’s other large acquisitions – witness the untimely departure of Autonomy CEO Mike Lynch in May, six months following the acquisition, and the complete absence of a public strategy to integrate Autonomy and create a pan-HP value proposition around its enterprise search capabilities.

Meanwhile Palm is dead (though it appears that HP is trying to keep a zombified version of Palm OS alive), HP lost Vyomesh “VJ” Joshi, the driving force behind its highly successful printer division, and partnerships with the likes of SAP have been troubled by the inability of HP to move fast enough on the hardware side to keep pace with its partners’ software innovations. Meanwhile, EDS is being gutted amid a planned $8 billion write-down, having proven in one quarter too many that it has been unable to adapt its go-to-market to pick up the large volume of smaller, strategic deals that it needs to turn in consistent quarterly success.

There is some good news: HP Software – which in retrospect may be happy it was kept separate from Autonomy – is building out a strong cloud management capability, and the systems business has some impressive products and may be getting an infusion of good karma from the HP/Oracle lawsuit ruling. The printing division has more than a few cool products and innovations up its sleeve, and HP’s latest ad campaign had someone holding what looked like a new HP Slate tablet, hopefully targeting the pending Windows 8 launch.

But the problem that bedeviled Apotheker, and would have still weighed on him even if he had not been fired last year, still remains: there is no pan-HP strategy, no way of talking to the market about how the whole is greater than the sum of the parts, no synergistic product set that taps into the company’s ability to provide a mix of services, hardware, and software that, taken together, provide that value-added positioning that would remake HP’s tarnished brand.

Instead, HP remains the company that Apotheker’s predecessor, Mark Hurd, was able to run to the short-term satisfaction of investors and to the detriment of anyone – employees, partners, customers – interested in long-term value: A company that in reality is a federation of completely separate entities, rarely working in unison, hopefully not too often at loggerheads, unable to cross-sell, and stuck in the corporate version of the Peter Principle, having risen to its level of incompetence and unable to go any further.

Not that HP isn’t trying, at least on the branding side. Its new “Make It Matter” spot, shown during the Olympics, is the culmination of a year-long effort that is as much targeted at the outside world of customers and partners as it is at the employees who, for good and bad, are apparently running for the exits in unexpected numbers.  In that spot, the message is clear – the power of technology to help people  work, achieve their dreams, learn, create, and change the world is HP’s birthright, and that’s what matters. Mixed into the visuals are the many ways in which HP already makes those aspirations come true, and it shows a cool side of HP that most people have no idea exists. In short, it’s a well-done piece worthy of the aspirations of a once-great company.

But the question remains: it is already too late to make those aspirations a reality? Can HP really matter to the market again?

My sense today is that it may be too late, at least for the federated HP that aspires to be like IBM in 2012 but looks more like IBM in 1993 – on the ropes and losing relevance and market share. In order for HP to be what it aspires to be would require not just a great pan-HP strategy but the rapid and flawless execution of that strategy, and that’s where I get a little pessimistic. It’s hard to turn around a company whose employee base is so massively demoralized, where the silo mentality is so engrained that acquired employees continue to use email addresses ending in eds.com and palm.com years after their companies were acquired, and where the third CEO in three years has yet to do more than triage a company that is seriously in danger of succumbing to its wounds.

What Whitman needs to do, in my opinion, is emulate Steve Ballmer: sign on to a strategic vision – the cloud, in Microsoft’s case – and then move everyone in the company, many kicking and screaming, towards this vision. Put a little slogan in the mix and make everyone in the company use it as a tag line – we’re all in became the de rigeur sign-off for Microsoft email messages  – and repeat it until it actually starts to sink in. And then tell Wall Street and the likes ofVanity Fair to stuff it, ride out the criticism, and start moving product strategy forward.

And, while there are those that think that Ballmer has laid an egg with his new approach (and I’m emphatically not one of them), even his detractors will have to admit that Microsoft as a company has a vision and is engaged in it, the employees are excited, and there are some seriously interesting gambles on the table – Azure, Windows 8, Kinect, to name a few – that could, and will, IMO, turn Microsoft around.

Going the Microsoft route is hardly a guarantee for success, in part because it takes years (Microsoft has been at its new vision for at least five years, and probably needs one more year to really make it solid), and in part because coming up with a truly momentous vision is harder than just about anything else in the technology industry. And even harder still when triage continues to be job number one two years after Hurd left.

In the end, vision will be the test of Whitman’s tenure, if she makes it past the one year mark. And my sense is that her vision will not include every one of the business units that make up HP today, mostly because it’s hard to envision how to bring together a dying PC industry, an increasingly commoditized printer and server business, a chronically underperforming services business, and a Software division that doesn’t actually own most of the company’s software assets, and forge a great, new strategy that the entire company can march towards. It’s clear HP is trying with its cloud strategy, and there may still be something to do with business analytics that is meaningful, but these are initiatives that would have been visionary if they had started under Hurd’s tenure. Today they look too much like me-too, catch-up strategies instead.

Fixing all of HP is just too hard. Even if the CEO was named Meg Wonder Woman, I wouldn’t bet on her being able to bring so many struggling lines of business together and make them matter. Something will have to go away in order for HP to live on, and I would expect that a year from now HP will have been significantly downsized if it is, indeed, going to continue to matter at all. Some things are just too big for their own good, and HP today may be just one of those things.