As companies seek to turn IT into a profit center and use new digital channels to operate their business, the vendor-imposed rules of mobile platforms are going to become a greater issue.

The numbers speak for themselves when it comes to the recent mass migration of the global population to smartphones and social media. The majority of the developed world now uses both, with just over a billion smart device users worldwide currently according to estimates, and approximately 1.4 billion users of social media by the end of this year. Many of these users are also in developing nations, and have begun to employing a combination of mobile devices and social media to realize significant — and occasionally momentous and inspired — changes to the world around them.

In terms of meaningful real-world impact of these technologies, mass self-organizing activity of all types has been enabled and greatly amplified by social media, mobile devices, or increasingly both (see Arab Spring, Kony 2012, SOPA, the Nigerian Constitution, and many other recent examples.) The reach of today’s global mobile and social networks, combined with motivated users and applications that explicitly tap into what makes them uniquely effective (read: the fundamental power laws of networks) are creating a growing level of genuine change in the status quo of politics, society, culture, government, and business. Though certainly, there’s still quite a journey ahead.

The root causes of this mass collaboration phenomenon are deep and tied directly to the relentless pervasiveness of new types of networked devices and applications. Now a second shoe seems to have fallen as well and it’s a crucial one: The world at large is starting to wake up to the fact that we’re all connected together, continuously, to everyone else in the world. What’s more, we’re now figuring out ways to optimize and make the very most of this fact, one almost certainly unique in all human history.

Geography, cost, time, discoverability, and even language have largely fallen as significant obstacles to communicating and collaborating with everyone in the world. Or perhaps more importantly, at scale, with any community in the world. 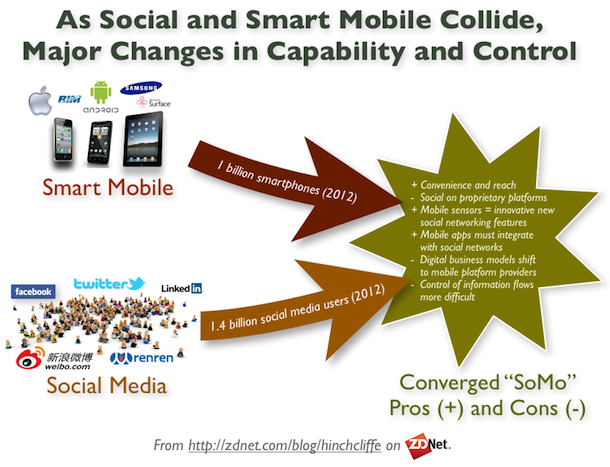 Both social and smart mobile devices have directly had a large hand in reducing these barriers to practically zero because of their innate network effects and ease-of-use.  Mobile apps and app stores have also done much to put the powerful new services in everyone’s hands, while social media has simultaenously connected the world’s population together in ways we almost entirely craft ourselves, to such an extent now that the Web itself is perhaps at risk of becoming outmoded as the most important global venue for information.

The impact of smart mobility and social on the enterprise

These same changes, as far as they sometimes seem from the halls of our local IT department, has long been taking place in our organizations, though they’re more pronounced now than ever.  I’ve explored in the past the topic of shadow IT, a fast growing phenomenon best described as the cloud becoming a more appealing and far easier place to source applications, information, and just about anything else one needs to get work done. Rather than going through official channels to get what you neeed, that is. Browser-based applications (SaaS, Web apps), search engines, app stores, and social networks are just a few examples of channels far, far larger, richer, and more useful when they’re outside the organization, as opposed to to the local and often quite limited technology landscape of the typical organization, even today.

Related: Shifting IT delivery to tablets: The strategic issues

It’s no wonder then that Gartner predicts that over a third of all IT will come directly from such sources soon, rather than official corporate IT channels. Businesses must adapt to an increasingly fast pace of technology change, which in turn is pushing the business world to change more quickly as well.  Specificially, this ranges from an onslaught of competitive new products and services to how customers are marketed to, sold, and supported.  Business users are tapping into the best technology resources they have to drive local improvements, and this includes the latest and most popular channels where the world is spending time (for example, social is nowthe #1 activity online as of 2012.)

Organizations looking to stay current and relevant are scrambling to address the current and near-future digital landscape, which will be the primary way most companies engage with their customers, workers, and even their supply chain. I’ve dubbed such proactive organizations next-generation enterprises, which are companies that don’t wait for disruption but seek out and add each new major technology development as a key tool to improve how they exchange value with the world.  As part of this adoption challenge, mobile and social have now become top concernsfor many companies this year, even if they’re unsure how to best apply them to their business.

Mobile and social colliding as much as cooperating

However, it may not be so easy to reconcile the current state of smart mobile devices with social media. Never mind that a large percentage of mobile apps are already social (with sharing buttons and close integration with Facebook, Twitter, Dropbox, etc.) Most organizations ignore the increasingly vast array of sensors in smart mobile devices that makes it even easier for the social applications collapse space and transport the real-world over the network in useful ways. I see that most business overlook the fact that mobile devices are essentially based on proprietary platforms that we have little control over. All of these are key issues with mobile/social convergence.

In fact, I’m surprised by how many companies still block Facebook (up to 67% by some estimates) and Twitter, essentially driving their workers onto their own IT systems — usually mobile devices — to talk with customers, prospects, industry colleagues, and co-workers in social channels. (Though in countries like China, social networks such as Weibo and Renren are more relevant, but not yet a prime integration target of mobile platforms vendors.)

But despite the growing of integration of social networks into the operating systems of mobile devices — Apple is the leader here with support for Twitter, Facebook, Yelp, and others — there is a number of fundamental issues in conflict that have significant implications for companies that must make the shift to mobile and social in a way that preserves what matters most to them.  Yet, even though I see the shift to mobile as the #1 priority with most CIOs currently — there’s not always a full appreciation of the extent to which social is intertwined with it.

For those tracking the collision of social and mobile, here seem to be the biggest issues:

The constraints yet enormous power of next-generation mobile platforms, combined with the shift to social channels — both inside and outside of organizations — is going to be a major test of IT departments, who have to do a double upgrade of their skills, technologies, infrastructure, architecture, and support capabilities to order to embrace both effectively.

In addition, and just as challenging for IT, the more profound and impactful benefits of social/mobile will ultimately come via the shift to digital business models that take tap into the mass self-organizing (aka social business) aspects I cited earlier. However, if organizations focus on the major issues — most of which I believe are summarized above — and are willing to invest appropriately, I believe mobile/social convergence will have limited negative impact and considerable upside. Those that ignore the issues, however, almost certainly have a painful learning curve ahead.