Salesforce.com, Enterprise Platforms, and the End of the End of Software 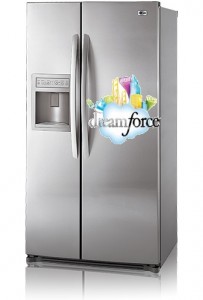 Do all companies build refrigerators when their product sets get too complex? That was the question I was asking myself as I sat in the audience during the partner keynote at Dreamforce last week, as a slide showing off the different parts of the company’s SaaS platform hove into view.

Memories of SAP’s NetWeaver danced in my brain as I quickly tallied the pieces, basically a what’s what of the Salesforce.com portfolio: a little Data.com, a little Force.com, some Site.com, Chatter, Heroku, a forthcoming identity management product…. Just like SAP lo those many years ago, Salesforce.com was building an edifice – make that an appliance – to the Gods of application and process integration.

Which was what the message to partners was all about: we need you to start integrating the growing portfolio of on-demand applications that our customers are deploying in a more comprehensive way in order to make sure they are reaping the benefits of the new on-demand world, integration-wise.

And just to hammer out the point, Pandora’s vice president of IT, Richard Rothschild, came on stage accompanied by a slide that itself harkened back to a previous era. Pandora, which boasts that it has essentially put all its key business processes in the cloud, has what can only be called a hodge-podge of largely disconnected, best of breed apps – Vana, Xactly, Brainshark, Cloud9, Data.com – that Rothschild admitted could be better integrated, if only someone could. Salesforce.com’s Ron Huddleston, the partner guy, agreed that this is job number one for his partners.

Welcome to the real enterprise, Salesforce.com.

I mean that seriously, by the way, without snark (though, like the NYT’s Gail Collins and her need to reference a certain dog-on-the-roof episode involving one of this year’s presidential candidates, I can’t help snarking just a little bit about the end of the end of software. I mean, doesn’t anyone notice that the end of software just keeps on needing more software to make it happen? I’m just saying…)

But more than anything, this first keynote of the conference brought home to me the realization that Salesforce.com has made some amazing strides in the platform war that is now engulfing the enterprise software market. And on paper and PowerPoint, they’re looking good.

I’ve written before about my three criteria for platform success in the 21st century, and Salesforce.com is  definitely on track with all three: a strong tool set and platform for staging apps, a critical mass of developers to build them, and an online commercial website where partners can sell the apps. It’s clear that AppExchange, the commercial side of the equation, is happening, there are 1700 apps to date, up 27% from last year, and installs are currently running at 50,000 per month. Not shabby.

The partners cum-developers are clearly in critical mass mode: they filled the keynote room to overflow, and customer after customer told me they were looking at the AppEx partners to fill in the white space in the processes that intersect with Salesforce.com.

And the tools are there, or on the way. Hence the refrigerator pitch, though it was interestingly devoid of details on just how easy it will be to build an integration framework that could tie together a Pandora-like pure cloud environment or a more common hybrid cloud/on-premise environment. But heck, that’s really hard. It took SAP years to get NetWeaver out of slideware mode and into simple and easy to implement mode, despite all their efforts. So I don’t expect Saleforce.com to settle this issue in just one Dreamforce. It will take a while, no doubt.

Which is fine, because regardless of when all the products emerge to make the platform fully functional, the Salesforce.com fridge sets the customer base on the right track. It’s a stake in the ground to a customer base that is increasingly using Salesforce.com as its jumping off point into a fully-formed, enterprise-wide SaaS strategy – and, considering that very few of them look like Pandora, the need for Salesforce.com to be 100 percent ready with its platform play is still a way off. But the need for the customers to have a strong message about where to go when they’reready to pull the trigger on an expanded platform view of SaaS is now, as in today, and Salesforce.com did right by itself and its customers with its platform announcements at Dreamforce.

I wish I could be as bullish on the social/trust message that was the gist of CEO Marc Benioff’s keynote and comments to the press and analyst corps. I remain a social skeptic, particularly in terms of how well the social/collaboration theory works in practice inside the enterprise. It’s irrefutable that this social/collaboration stuff works brilliantly in the B2C world (if by brilliantly you accept the fact that the industry is using social to define the latest way to turn loyalty into upsell opportunities, something as old as S&H Green Stamps). But in the internal operations of the enterprise, the adoption of social technology is still of limited value.

The problem isn’t the technology, it’s the fact that social software is not innately engaging or proscriptive – it neither compels employees sufficiently nor tells them what to do in order to be more social or collaborative. Hence the irony of offerings from the likes of gamification vendors like Badgeville, which announced a gamification offering to help shore up the engagement of Salesforce.com users in their social/collaborative activities. We still have a long way to go to bring the success of B2C social collaboration into the core of the enterprise, and the numbers show it.

But that’s okay, Benioff is getting tons of cred as a visionary for pushing this vision (cf the posts from many of my fellow Enterprise Irregulars), and meanwhile that visioneering is driving tens of thousands of customers and hundreds of partners to Dreamforce and the growing Salesforce.com ecosystem. And while at the end of the day the business at hand is still good old CRM and a few adjacencies,  that’s okay too. Because it’s clear the there’s some serious bets being made by Benioff and company on the future of the enterprise, and the foundational elements are starting to emerge. And with it the continued leadership of the market pioneer, new refrigeration appliances notwithstanding.

2 responses to “Salesforce.com, Enterprise Platforms, and the End of the End of Software”