This market is going to follow a curve that is the same shape as curves we’ve seen before when we put technologies into people’s hands that were previously only available to large corporations.  We did it with Personal Computers.  We did it with the Printing Press.  Video, Music, Book Publishing now via eBooks: there is a long list.  The difference is that until now it has mostly been about giving people the ability to create and publish information.  Information meaning streams of 1′s and 0′s that when properly interpreted, become eBooks, music, photographs, and so forth.  What’s different this time around is we’re giving people the ability to produce concrete substance, material goods, things that can be touched and held.

That’s a big step up from information in terms of how it may affect the world.  It’s a revolution that’s been a long time in coming because it has been much harder to accomplish.  We’re still not done yet, either.  This is unfolding as we speak, and we won’t see the full ramifications for probably 10 years.  Because we’re dealing with matter and not information, I suspect there will be more friction and therefore the evolutionary impact of it all will simply take longer.  But, along the way, it will make for a marvelous ride.

If you’re interested in this sort of thing, the Altair 8800′s (we’re not even up to the Apple II point yet, let alone IBM PC stage) are visible all around us.  I’ve been watching a 3D Printer called the Form 1 over on Kickstarter go from $366,000 to $764,000 in pledges just overnight.  Breathtaking momentum there for what is a fairly technical and geeky gadget.  A group of folks who met at MIT’s famed Media Lab came together to make this cool thing: 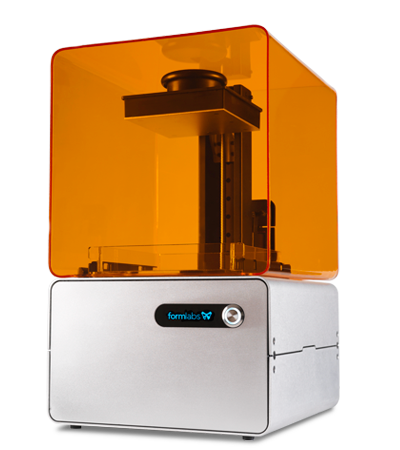 The printer uses a technology involving laser activated plastic resin to make parts like these:

The parts are all plastic with this technology, and they have a maximum size that fits in about a 5″ square cube.  In another parallel to the original PC days, it costs about the same:  $2699 will get you one.

There are other 3D printing technologies available that can be cheaper, print larger objects, use less expensive resins (or other raw material), and have various other trade offs.  But the bottom line is you can get an idea, draw it up in a CAD program, run that through the 3D printing software, push a button, and not nearly as quickly as Piccard can get his, “Tea, Earl Grey, hot”, you’ll be holding an object that is your idea.

There are parallels to nearly every aspect of the PC infrastructure.  For example, the SaaS/Cloud movement will happen via Service Bureaus where you can design a part online, push a button to send the specification to a Service Bureau, and the part will be mailed to you.  Or, perhaps you’ll just roll down to the local Kinko’s where they have a 3D printer.  Maybe they have an expensive industrial-quality printer that does larger objects out of tougher materials more quickly than your home model.

As the Altair 8800 genre gets underway, who will do the IBM PC?  Autodesk is making a few noises along these lines, at least where software is concerned.  Who will play Apple’s role?  Who will be the Microsoft that owns the software?  We already have Open Source playing a vibrant part in the ecosystem, and controversy over one company that is backing away from Open Source.  And there are many more technologies too.  3D printing is great for plastic, but you can shape wood with a CNC Router, and metal with CNC Mills and Lathes.  It’s all cheap enough for the desktop these days.

It’s facinating to see this movement unfolding.  I don’t know how big it will turn out to be, but I know it will be big and I’m really glad to be working in the space with CNCCookbook.  If you’d like to learn more about 3D printers, check out my Hi Res 3D Printer page over on the ‘Cookbook.  If you’d like to survey what’s possible, go through some of the CNCCookbook blog.  Try some of the categories like “Cool” or “Beginner” on the blog.

If you wonder what the power of it all could be, consider that Form 1′s Kickstarter project went up almost $100,000 just in the time I spent writing this article.  Ask yourself what would happen if anyone with an idea and an inexpensive Desktop Manufacturing machine could make any of these things any time they wanted to.