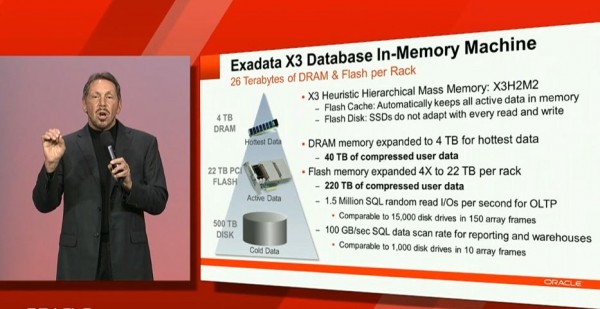 I honestly thought I was going to have to wait longer to hear anyone from Oracle talk about seriously focusing the company’s hardware and software lines on the Cloud.  True, they’ve been saying cloud-like things for a couple of years but the pronouncements were features and functions that added something to the cloud discussion without going “all in” as some others in the industry have said.  But last night CEO Larry Ellison did what I’d forecasted last week in a way that is uniquely Oracle but nevertheless a good, defensible (and somewhat debatable) position.

Here’s what I said last week in my forecast,

It seems this family of hardware (Exa-hardware) is built and optimized for very big jobs involving terabytes of data and gazillions of users.  That’s exactly the kind of stuff the growing cloud computing movement might gobble up.  Currently data centers are masses of commodity servers in racks running feverishly but without a layer of sophisticated management that would optimize their utilization and reduce costs…

The next logical step would be to endorse the Exa-hardware as a sustainability tool for a power hungry planet.  I’m looking for some sustainability messaging from Oracle and it could even happen…

Sustainability is not alien to ideas like mobility, cloud, social and analytics, you can’t separate them.  I think if Oracle wants to maintain its leadership position with many of the largest companies in the world, it needs to put a stake in the ground and become a thought leader here…

So last night, Ellison took aim at the cloud and announced Oracle 12c a database for the cloud that supports multitenancy, if you want it, and he announced the Oracle Private Cloud running on Exa-hardware and delivered as a tight bundle to customers who want to get to the cloud, simplify their lives, and not fret about managing all that stuff.  He also announced Exadata 3, which can hold up to 26 TB of data – “All your databases.” The cool thing about Exadata 3 is that the 26 TB is all silicone based memory, it doesn’t count the spindles that are rapidly becoming secondary in a high performance enterprise environment.

He made some traditional arguments about the cloud being more efficient and economic and at some points came close to claiming credit for inventing it.  Truth is he did have a hand in inventing modern cloud computing as a very early investor in Salesforce and NetSuite and as the Zen master for Benioff and Nelson.  But his skin in the game had been relatively minimal.

Now, while there is plenty to like from a sustainability perspective, it should be acknowledged that what got announced is a bunch of half steps designed to get enterprise data centers into the cloud without much disruption.  I think this means that Oracle, for the moment (which will be about a decade) will not be aggressively selling the virtualization that comes with multitenancy and as a result there will still be a great deal of wasted power and underutilization in some cloud data centers.

But in a decade we could see a switch flip and everyone will get religion about power consumption and pollution and the switch to virtualization will happen very quickly because some very large companies will have been prepositioned for the change.

Actually a decade might be a long time and 6 or 7 years might be more like it simply because Oracle has many competitors going to the cloud, most notably Salesforce, and that will accelerate the timetable.

The next step, which has to come this week, will be for the company to shift gears to software – cloud based software – that makes the cloud even more attractive.  Look for this to happen especially in the CX Summit or whatever they are calling it, on Wednesday.  That will be the day that Anthony Lye talks a lot about how the companies he bought last year – like RightNow and ATG and others – are making the Oracle cloud a serious competitor.

Achilles’ heel is still Fusion.  What’s up with Fusion?

Finally, many, if not most of the big cloud computing companies are running fault tolerant data centers using conventional racks of blade servers and disks.  That’s giving us 3 to 4 9’s of reliability but I think before we can hope to get to the 7 to 9 9’s that will make cloud truly ubiquitous and universal utility grade computing we’re going to need some re-architecting.  Regardless of what you might think of Oracle’s approach to the cloud, the hardware is an appealing approach for that alone.

Oracle likes to message that 20 out of 20 of the top banks/pharmaceutical companies/whatever, use Oracle and it wouldn’t surprise me if they’re going for 10 of the 10 biggest cloud companies.  That will take some work and given the multiple levels of competitiveness and lack of love between the players, that might take even more than a decade to happen.