By Vinnie Mirchandani on October 4, 2012 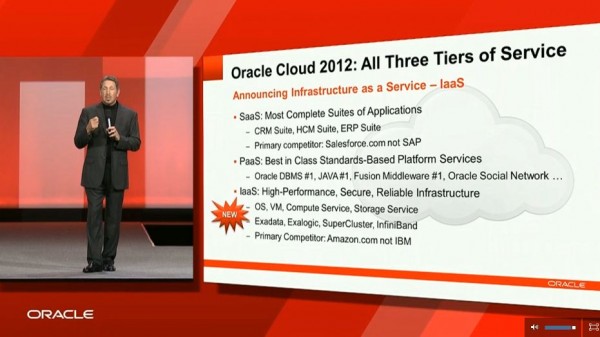 I have waited for over a decade to see an enterprise vendor – IBM, HP, SunGard, EMC etc – detail how they would deliver to their promises of on-demand, utility, cloud computing. But they continue to persist with data centers designed during the Cold War in locations which often violate more recent tax, latency and energy efficiency driven location considerations. And provide compute, storage and other services at shockingly fat prices.

As a result in my last two books, I have profiled the Microsoft Azure data center infrastructure and more recently the Facebook Prineville data center and Google’s massive wind and other alternate fuel commitments to fuel its data center and other operations. They are the modern data center innovators and when you talk to them they don’t talk admiringly about IBM or HP. They talk about Amazon’s data center network, Apple’s iCloud, the Switch NAP – interestingly, mostly about other consumer tech companies.

So, I was delighted to hear Larry Ellison announce his Cloud vision on Sunday. It’s big and ambitious. I was pleased to hear Mark Hurd during a one on one say “the Amazon type cloud computing market is only mildly interesting to us”.

Let’s face it though. Oracle is still somewhat of a niche player in data center circles. It has a smallish data center in Austin, and a much bigger one in Salt Lake City which has taken years to roll out. It is deploying others in the UK,  Netherlands and Australia, but will need to continue to add global capacity. That should translate to a significant spike in capex (like Microsoft had as it built out its Azure infrastructure). And in more credit for design, cooling, power usage, energy sourcing and other data center  innovations that we mostly credit these days to Google and Amazon.

The other major impact of the Oracle cloud will be as version 12c – its multi-tenant database  – rolls out. Thomas Kurian says a few SaaS vendors are already beta customers. I presume they are recent startups.  The real impact will be if established SaaS vendors like NetSuite, Workday and Salesforce.com migrate their proprietary multi-tenancy in their application layer to the database layer.

I like Larry and Mark’s moon shot call about their public cloud. Hope their own operations, investments and the rest of the industry rally around it. Its time the enterprise tech world quit lagging the consumer tech world when it comes to cloud efficiency and scale.